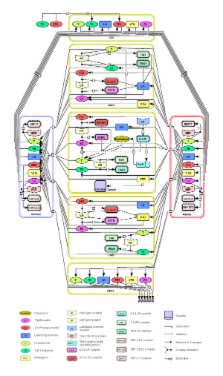 Endocrine disrupting chemicals (e.g., estrogens, androgens and their mimics) are known to affect reproduction in fish. 17α-ethynylestradiol is a synthetic estrogen used in birth control pills. 17β-trenbolone is a relatively stable metabolite of trenbolone acetate, a synthetic androgen used as a growth promoter in livestock. Both 17α-ethynylestradiol and 17β-trenbolone have been found in the aquatic environment and affect fish reproduction. In this study, we developed a physiologically-based computational model for female fathead minnows (FHM, Pimephales promelas), a small fish species used in ecotoxicology, to simulate how estrogens (i.e., 17α-ethynylestradiol) or androgens (i.e., 17β-trenbolone) affect reproductive endpoints such as plasma concentrations of steroid hormones (e.g., 17β-estradiol and testosterone) and vitellogenin (a precursor to egg yolk proteins).

Using Markov Chain Monte Carlo simulations, the model was calibrated with data from unexposed, 17α-ethynylestradiol-exposed, and 17β-trenbolone-exposed FHMs. Four Markov chains were simulated, and the chains for each calibrated model parameter (26 in total) converged within 20,000 iterations. With the converged parameter values, we evaluated the model's predictive ability by simulating a variety of independent experimental data. The model predictions agreed with the experimental data well.

The physiologically-based computational model represents the hypothalamic-pituitary-gonadal axis in adult female FHM robustly. The model is useful to estimate how estrogens (e.g., 17α-ethynylestradiol) or androgens (e.g., 17β-trenbolone) affect plasma concentrations of 17β-estradiol, testosterone and vitellogenin, which are important determinants of fecundity in fish.

Collapse of a fish population after exposure to a synthetic estrogen.

James Lazorchak,  L P Blanchfield,  Karen A Kidd … (2007)
Municipal wastewaters are a complex mixture containing estrogens and estrogen mimics that are known to affect the reproductive health of wild fishes. Male fishes downstream of some wastewater outfalls produce vitellogenin (VTG) (a protein normally synthesized by females during oocyte maturation) and early-stage eggs in their testes, and this feminization has been attributed to the presence of estrogenic substances such as natural estrogens [estrone or 17beta-estradiol (E2)], the synthetic estrogen used in birth-control pills [17 alpha-ethynylestradiol (EE2)], or weaker estrogen mimics such as nonylphenol in the water. Despite widespread evidence that male fishes are being feminized, it is not known whether these low-level, chronic exposures adversely impact the sustainability of wild populations. We conducted a 7-year, whole-lake experiment at the Experimental Lakes Area (ELA) in northwestern Ontario, Canada, and showed that chronic exposure of fathead minnow (Pimephales promelas) to low concentrations (5-6 ng x L(-1)) of the potent 17 alpha-ethynylestradiol led to feminization of males through the production of vitellogenin mRNA and protein, impacts on gonadal development as evidenced by intersex in males and altered oogenesis in females, and, ultimately, a near extinction of this species from the lake. Our observations demonstrate that the concentrations of estrogens and their mimics observed in freshwaters can impact the sustainability of wild fish populations.

Effects of the androgenic growth promoter 17-beta-trenbolone on fecundity and reproductive endocrinology of the fathead minnow.

Repeating history: pharmaceuticals in the environment.