Case-finding for COPD in primary care: a qualitative study of patients’ perspectives 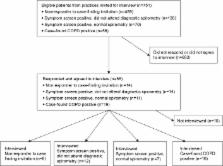 COPD is a leading cause of morbidity and mortality, yet it remains largely under-diagnosed. Case-finding is encouraged by many professionals, but there is a lack of information on the patients’ views and perspectives.

Semistructured interviews were conducted with adults, aged 40 years or older with a history of smoking, who were eligible and invited for case-finding for COPD as a part of a large UK primary care trial. Patients, including those who consented or declined participation and those with and without COPD after screening, were interviewed. Interviews were transcribed and analyzed using the framework method.

The 43 interviews revealed the following two main categories of themes: patients’ views on COPD case-finding and barriers to case-finding. Overall, case-finding was deemed important and beneficial. Participants highlighted the need for screening activities to be convenient for patients but perceived that general practitioners (GPs) lacked the time and accessing appointments was difficult. Desire for a health check among symptomatic patients facilitated participation in case-finding. Psychological barriers to engagement included denial of ill health or failure to recognize symptoms, fear of the “test”, and lung symptoms being low on the hierarchy of patient health complaints. Mechanical barriers included providing care for another person (and therefore being too busy), being unable to access GP appointments, and lacking feedback of spirometry results or communication of the diagnosis.

Patient engagement with case-finding may be limited by denial or lack of recognition of symptoms and physical barriers to attendance. Increasing public awareness of COPD risk factors and early symptoms may enhance case-finding.

R. A. McPherson,  A Chapple,  S Ziebland (2004)
To draw on narrative interviews with patients with lung cancer and to explore their perceptions and experience of stigma. Qualitative study. United Kingdom. 45 patients with lung cancer recruited through several sources. Participants experienced stigma commonly felt by patients with other types of cancer, but, whether they smoked or not, they felt particularly stigmatised because the disease is so strongly associated with smoking. Interaction with family, friends, and doctors was often affected as a result, and many patients, particularly those who had stopped smoking years ago or had never smoked, felt unjustly blamed for their illness. Those who resisted victim blaming maintained that the real culprits were tobacco companies with unscrupulous policies. Some patients concealed their illness, which sometimes had adverse financial consequences or made it hard for them to gain support from other people. Some indicated that newspaper and television reports may have added to the stigma: television advertisements aim to put young people off tobacco, but they usually portray a dreadful death, which may exacerbate fear and anxiety. A few patients were worried that diagnosis, access to care, and research into lung cancer might be adversely affected by the stigma attached to the disease and those who smoke. Patients with lung cancer report stigmatisation with far reaching consequences. Efforts to help people to quit smoking are important, but clinical and educational interventions should be presented with care so as not to add to the stigma experienced by patients with lung cancer and other smoking related diseases.

Access to services for patients with chronic obstructive pulmonary disease: the invisibility of breathlessness.

Marjolein Gysels,  Irene J Higginson (2008)
The aim of this study was to explore the experience of breathlessness in patients with chronic obstructive pulmonary disease (COPD) through patients' accounts of their interactions with services. The study has a qualitative design based on Grounded Theory. Data were collected through semistructured, in-depth interviews over the period of July 2005 to March 2006. This was complemented by participant observation during outpatient consultations. NVivo software was used to manage and analyze the data. The study is part of a wider program, "Improving Breathlessness." Data were collected in a large inner city teaching hospital and the community in London. A purposive sample of 18 COPD patients was selected. Fourteen patients were recruited from outpatient clinics in the hospital, four patients via a family doctor's surgery. Patients with moderate or severe COPD, who were experiencing problems with breathlessness, were included. The results showed that the low access to services by COPD patients is due to the nature of breathlessness itself, with its slow and surreptitious onset; patient interactions with the social environment assigning stigma to breathlessness; and the way the symptom is addressed by institutions, such as health care services, which discredit the patient's experience. The concept that best captures the experience of breathlessness is "invisibility." Problems with access to care are an additional dimension of suffering added to the illness experience. A palliative care approach is promoted and essential priorities identified to reduce barriers to access.

Albert L Siu,  Kirsten Bibbins-Domingo,  David Grossman … (2016)
About 14% of US adults aged 40 to 79 years have chronic obstructive pulmonary disease (COPD), and it is the third leading cause of death in the United States. Persons with severe COPD are often unable to participate in normal physical activity due to deterioration of lung function.