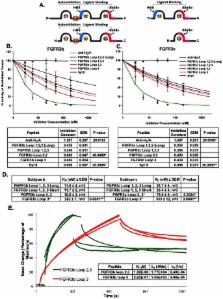 Botulinum neurotoxin serotype A (BoNT/A) causes transient muscle paralysis by entering motor nerve terminals (MNTs) where it cleaves the SNARE protein Synaptosomal-associated protein 25 (SNAP25 206) to yield SNAP25 197. Cleavage of SNAP25 results in blockage of synaptic vesicle fusion and inhibition of the release of acetylcholine. The specific uptake of BoNT/A into pre-synaptic nerve terminals is a tightly controlled multistep process, involving a combination of high and low affinity receptors. Interestingly, the C-terminal binding domain region of BoNT/A, H C/A, is homologous to fibroblast growth factors (FGFs), making it a possible ligand for Fibroblast Growth Factor Receptors (FGFRs). Here we present data supporting the identification of Fibroblast Growth Factor Receptor 3 (FGFR3) as a high affinity receptor for BoNT/A in neuronal cells. H C/A binds with high affinity to the two extra-cellular loops of FGFR3 and acts similar to an agonist ligand for FGFR3, resulting in phosphorylation of the receptor. Native ligands for FGFR3; FGF1, FGF2, and FGF9 compete for binding to FGFR3 and block BoNT/A cellular uptake. These findings show that FGFR3 plays a pivotal role in the specific uptake of BoNT/A across the cell membrane being part of a larger receptor complex involving ganglioside- and protein-protein interactions.

Botulinum neurotoxin serotype A (BoNT/A) is one of seven neurotoxins (BoNT/A-G), produced by the bacteria Clostridium botulinum that are both poisons and versatile therapeutics. These toxins enter motor neurons where they prevent the release of acetylcholine at the neuromuscular junction. The specific uptake of BoNT/A across the neuronal cell membrane is dependent on specific receptor interactions. Binding to high density ganglioside GT1b mediates the initial binding step and via a low affinity interaction concentrates BoNT/A on the cell surface. Once anchored in the membrane, lateral movements within the plasma membrane facilitate intermolecular interactions of BoNT/A with additional lower density but higher affinity protein receptors. Here we present data supporting the identification of Fibroblast Growth Factor Receptor 3 (FGFR3) as a high affinity receptor for BoNT/A. We show that BoNT/A binds to FGFR3 with high affinity and functions as an agonist ligand for FGFR3. The identification of this novel receptor for BoNT/A represents an important advance in the understanding of the mechanism of action of BoNT/A, especially on the initial steps of neuronal uptake, and can be the basis for the development of new specific countermeasures and new BoNT/A-based therapeutics.

Geoffrey L. Greene,  Arthur Tischler (1976)
A single cell clonal line which responds reversibly to nerve growth factor (NGF) has been established from a transplantable rat adrenal pheochromocytoma. This line, designated PC12, has a homogeneous and near-diploid chromosome number of 40. By 1 week's exposure to NGF, PC12 cells cease to multiply and begin to extend branching varicose processes similar to those produced by sympathetic neurons in primary cell culture. By several weeks of exposure to NGF, the PC12 processes reach 500-1000 mum in length. Removal of NGF is followed by degeneration of processes within 24 hr and by resumption of cell multiplication within 72 hr. PC12 cells grown with or without NGF contain dense core chromaffin-like granules up to 350 nm in diameter. The NGF-treated cells also contain small vesicles which accumulate in process varicosities and endings. PC12 cells synthesize and store the catecholamine neurotransmitters dopamine and norepinephrine. The levels (per mg of protein) of catecholamines and of the their synthetic enzymes in PC12 cells are comparable to or higher than those found in rat adrenals. NGF-treatment of PC12 cells results in no change in the levels of catecholamines or of their synthetic enzymes when expressed on a per cell basis, but does result in a 4- to 6-fold decrease in levels when expressed on a per mg of protein basis. PC12 cells do not synthesize epinephrine and cannot be induced to do so by treatment with dexamethasone. The PC12 cell line should be a useful model system for neurobiological and neurochemical studies.

I Lax,  Jacob Eswarakumar,  Veraragavan P. Eswarakumar … (2005)
The 22 members of the fibroblast growth factor (FGF) family of growth factors mediate their cellular responses by binding to and activating the different isoforms encoded by the four receptor tyrosine kinases (RTKs) designated FGFR1, FGFR2, FGFR3 and FGFR4. Unlike other growth factors, FGFs act in concert with heparin or heparan sulfate proteoglycan (HSPG) to activate FGFRs and to induce the pleiotropic responses that lead to the variety of cellular responses induced by this large family of growth factors. A variety of human skeletal dysplasias have been linked to specific point mutations in FGFR1, FGFR2 and FGFR3 leading to severe impairment in cranial, digital and skeletal development. Gain of function mutations in FGFRs were also identified in a variety of human cancers such as myeloproliferative syndromes, lymphomas, prostate and breast cancers as well as other malignant diseases. The binding of FGF and HSPG to the extracellular ligand domain of FGFR induces receptor dimerization, activation and autophosphorylation of multiple tyrosine residues in the cytoplasmic domain of the receptor molecule. A variety of signaling proteins are phosphorylated in response to FGF stimulation including Shc, phospholipase-Cgamma, STAT1, Gab1 and FRS2alpha leading to stimulation of intracellular signaling pathways that control cell proliferation, cell differentiation, cell migration, cell survival and cell shape. The docking proteins FRS2alpha and FRS2beta are major mediators of the Ras/MAPK and PI-3 kinase/Akt signaling pathways as well as negative feedback mechanisms that fine-tune the signal that is initiated at the cell surface following FGFR stimulation.

Moosa Mohammadi,  Andrew Beenken (2009)
The family of fibroblast growth factors (FGFs) regulates a plethora of developmental processes, including brain patterning, branching morphogenesis and limb development. Several mitogenic, cytoprotective and angiogenic therapeutic applications of FGFs are already being explored, and the recent discovery of the crucial roles of the endocrine-acting FGF19 subfamily in bile acid, glucose and phosphate homeostasis has sparked renewed interest in the pharmacological potential of this family. This Review discusses traditional applications of recombinant FGFs and small-molecule FGF receptor kinase inhibitors in the treatment of cancer and cardiovascular disease and their emerging potential in the treatment of metabolic syndrome and hypophosphataemic diseases.

I have read the journal's policy and have the following conflicts. BJ, PG, JBN, BC, YM, LES, RSB, JF, KRA, and EFS are employees of Allergan Inc. and hold Allergan stock. RCS is a consultant for Allergan Inc. This does not alter our adherence to all PLoS Pathogens policies on sharing data and materials.

This work was supported by Allergan Inc. and by the Pacific Southwest Regional Center of Excellence (U54 AI065359, RCS). The funders had no role in study design, data collection and analysis, or preparation of the manuscript. Allergan's management supports the decision to publish.