Recruitment and inclusion procedures as “pain killers” in clinical trials? 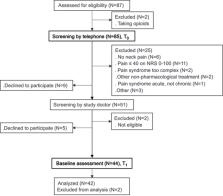 Recruitment and inclusion procedures in clinical trials are time critical. This holds particularly true for studies investigating patients with fluctuating symptom patterns, like those with chronic neck pain. In a feasibility study on neck pain, we found a clinically relevant decrease in pain ratings within the recruitment period. This paper analyses the phenomenon and gives recommendations for recruitment procedures in clinical trials on pain.

Average pain intensity score decreased significantly from 60.3±13.3 at telephone interview to 38.1±21.7 at baseline assessment. This represents a relative change of 36.8%. A weak but significant negative correlation was found between number of days between assessments and pain rating differences. There was a positive correlation between change of pain intensity and the pain level at the first contact, indicating that the decreased pain ratings over time were also dependent on the initial pain rating.

The clinically significant changes in pain intensity were weakly related to waiting time and moderately dependent on initial pain intensity, suggesting regression to the mean. The natural course of the disease and the Hawthorne effect are also discussed as contributing factors.

The Hawthorne effect: A reconsideration of the methodological artifact.

New insights into the placebo and nocebo responses.

Fabrizio Benedetti,  Paul Enck,  Manfred Schedlowski (2008)
In modern medicine, the placebo response or placebo effect has often been regarded as a nuisance in basic research and particularly in clinical research. The latest scientific evidence has demonstrated, however, that the placebo effect and the nocebo effect, the negative effects of placebo, stem from highly active processes in the brain that are mediated by psychological mechanisms such as expectation and conditioning. These processes have been described in some detail for many diseases and treatments, and we now know that they can represent both strength and vulnerability in the course of a disease as well as in the response to a therapy. However, recent research and current knowledge raise several issues that we shall address in this review. We will discuss current neurobiological models like expectation-induced activation of the brain reward circuitry, Pavlovian conditioning, and anxiety mechanisms of the nocebo response. We will further explore the nature of the placebo responses in clinical trials and address major questions for future research such as the relationship between expectations and conditioning in placebo effects, the existence of a consistent brain network for all placebo effects, the role of gender in placebo effects, and the impact of getting drug-like effects without drugs.

Loren Parsons (1974)
The Hawthorne effect in experimental research is the unwanted effect of the experimental operations themselves. Following the Hawthorne studies, various explanations have been proposed to account for rising rates of production. Although in the Relay Assembly Test Room experiment the experimental operations may have produced other extraneous variables, a reexamination based on new and neglected evidence has yielded a new interpretation. The new variable, made more plausible because research in other contexts has shown it to have similar effects, is a combination of information feedback and financial reward. It is an example of the control of behavior by its consequences. Although several approaches may be taken to explain the effects of response-consequence contingencies, I have favored operant conditioning because it seems to account for progressive increases in response rate-the Hawthorne phenomenon. Generalizing from the particular situation at Hawthorne, I would define the Hawthorne effect as the confounding that occurs if experimenters fail to realize how the consequences of subjects' performance affect what subjects do. But the Hawthorne effect need not be viewed solely as a problem in conducting experiments. The phenomenon that created it should be studied in its own right, as Sommer (67) suggested with a different phenomenon in mind. The study of response-consequence contingencies might well be extended to the examination of motivation in industrial workers.