The diagnostic work up of growth failure in secondary health care; An evaluation of consensus guidelines 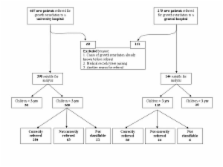 As abnormal growth might be the first manifestation of undetected diseases, it is important to have accurate referral criteria and a proper diagnostic work-up. In the present paper we evaluate the diagnostic work-up in secondary health care according to existing consensus guidelines and study the frequency of underlying medical disorders.

Data on growth and additional diagnostic procedures were collected from medical records of new patients referred for short stature to the outpatient clinics of the general paediatric departments of two hospitals (Erasmus MC – Sophia Children's Hospital, Rotterdam and Spaarne Hospital, Haarlem) between January 1998 and December 2002. As the Dutch Consensus Guideline (DCG) is the only guideline addressing referral criteria as well as diagnostic work-up, the analyses were based on its seven auxological referral criteria to determine the characteristics of children who are incorrectly referred and the adequacy of workup of those who are referred.

Twenty four percent of children older than 3 years were inappropriately referred (NCR). Of the correctly referred children 74–88% were short corrected for parental height, 40–61% had a height SDS <-2.5 and 21% showed height deflection (Δ HSDS < -0.25/yr or Δ HSDS < -1). In none of the children a complete detailed routine diagnostic work up was performed and in more than 30% no routine laboratory examination was done at all. Pathologic causes of short stature were found in 27 children (5%).

Existing guidelines for workup of children with suspected growth failure are poorly implemented. Although poorly implemented the DCG detects at least 5% pathologic causes of growth failure in children referred for short stature. New guidelines for referral are required with a better sensitivity and specificity, wherein distance to target height should get more attention. The general diagnostic work up for short stature should include testing for celiac disease in all children and for Turner syndrome in girls.

Rob Lindsay, Marcia Lynn Feldkamp, David Money Harris … (1994)
Serial measurements of elementary-school children were conducted for 2 consecutive years to assess height and growth velocity and to determine the prevalence of growth hormone deficiency (GHD) in American children. Trained volunteers measured 114,881 children the first year; 79,495 growth rates were calculated after the second measurements. The height and growth velocity curves generated were very similar to the currently used charts. We examined 555 children with short stature (< 3rd percentile) and poor growth rates (< 5 cm/yr). Five percent had an endocrine disorder. The presence of GHD (peak level, < 10 ng/dl with two provocative tests) was found in 16 previously unrecognized children; 17 children from this school population were already known to have GHD. Boys outnumbered girls 2.7:1 (p = 0.006). Six girls with Turner syndrome also were identified. We conclude that (1) the growth curves generated in the 1960s and 1970s are valid for children of the 1990s; (2) most children growing < 5 cm/yr (a commonly used threshold rate) will not have an endocrine disorder; (3) many children (48% in this study) with GHD and others with Turner syndrome may currently be unrecognized and untreated; (4) GHD appears to be more common in boys; and (5) the prevalence of GHD in the United States is at least 1:3480.

Consensus Guidelines for the Diagnosis and Treatment of Growth Hormone (GH) Deficiency in Childhood and Adolescence: Summary Statement of the GH Research Society

Update of guidelines for the use of growth hormone in children: the Lawson Wilkins Pediatric Endocrinology Society Drug and Therapeutics Committee.