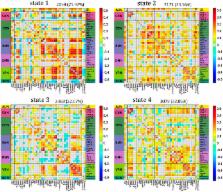 Creativity is thought to require the flexible reconfiguration of multiple brain regions that interact in transient and complex communication patterns. In contrast to prior emphases on searching for specific regions or networks associated with creative performance, we focused on exploring the association between the reconfiguration of dynamic functional connectivity states and creative ability. We hypothesized that a high frequency of dynamic functional connectivity state transitions will be associated with creative ability. To test this hypothesis, we recruited a high-creative group (HCG) and a low-creative group (LCG) of participants and collected resting-state fMRI (R-fMRI) data and Torrance Tests of Creative Thinking (TTCT) scores from each participant. By combining an independent component analysis with a dynamic network analysis approach, we discovered the HCG had more frequent transitions between dynamic functional connectivity (dFC) states than the LCG. Moreover, a confirmatory analysis using multiplication of temporal derivatives also indicated that there were more frequent dFC state transitions in the HCG. Taken together, these results provided empirical evidence for a linkage between the flexible reconfiguration of dynamic functional connectivity states and creative ability. These findings have the potential to provide new insights into the neural basis of creativity.

Renaud Lambiotte,  Etienne Lefebvre,  Vincent D Blondel … (2008)
We propose a simple method to extract the community structure of large networks. Our method is a heuristic method that is based on modularity optimization. It is shown to outperform all other known community detection method in terms of computation time. Moreover, the quality of the communities detected is very good, as measured by the so-called modularity. This is shown first by identifying language communities in a Belgian mobile phone network of 2.6 million customers and by analyzing a web graph of 118 million nodes and more than one billion links. The accuracy of our algorithm is also verified on ad-hoc modular networks. .

Rich-club organization of the human connectome.

P Martijn den Reijer,  Olaf Sporns,  Jean-Paul de Vries … (2012)
The human brain is a complex network of interlinked regions. Recent studies have demonstrated the existence of a number of highly connected and highly central neocortical hub regions, regions that play a key role in global information integration between different parts of the network. The potential functional importance of these "brain hubs" is underscored by recent studies showing that disturbances of their structural and functional connectivity profile are linked to neuropathology. This study aims to map out both the subcortical and neocortical hubs of the brain and examine their mutual relationship, particularly their structural linkages. Here, we demonstrate that brain hubs form a so-called "rich club," characterized by a tendency for high-degree nodes to be more densely connected among themselves than nodes of a lower degree, providing important information on the higher-level topology of the brain network. Whole-brain structural networks of 21 subjects were reconstructed using diffusion tensor imaging data. Examining the connectivity profile of these networks revealed a group of 12 strongly interconnected bihemispheric hub regions, comprising the precuneus, superior frontal and superior parietal cortex, as well as the subcortical hippocampus, putamen, and thalamus. Importantly, these hub regions were found to be more densely interconnected than would be expected based solely on their degree, together forming a rich club. We discuss the potential functional implications of the rich-club organization of the human connectome, particularly in light of its role in information integration and in conferring robustness to its structural core.

,   (2005)
High-throughput techniques are leading to an explosive growth in the size of biological databases and creating the opportunity to revolutionize our understanding of life and disease. Interpretation of these data remains, however, a major scientific challenge. Here, we propose a methodology that enables us to extract and display information contained in complex networks. Specifically, we demonstrate that one can (i) find functional modules in complex networks, and (ii) classify nodes into universal roles according to their pattern of intra- and inter-module connections. The method thus yields a ``cartographic representation'' of complex networks. Metabolic networks are among the most challenging biological networks and, arguably, the ones with more potential for immediate applicability. We use our method to analyze the metabolic networks of twelve organisms from three different super-kingdoms. We find that, typically, 80% of the nodes are only connected to other nodes within their respective modules, and that nodes with different roles are affected by different evolutionary constraints and pressures. Remarkably, we find that low-degree metabolites that connect different modules are more conserved than hubs whose links are mostly within a single module.