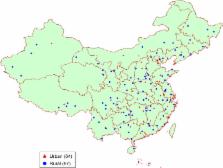 Previous studies suggested an association between chronic obstructive pulmonary disease (COPD) and cognitive impairment, mostly in developed countries. There is no evidence available on the association between these two common chronic disorders in the elderly people in People’s Republic of China where the population is aging rapidly.

The study population was randomly selected from a nationally representative Disease Surveillance Point System in People’s Republic of China. A standardized questionnaire was administered by trained interviewers during a face-to-face interview in the field survey conducted in 2010–2011. Cognitive function was assessed using the Mini-Mental State Examination. COPD was measured by self-report and the Medical Research Council respiratory questionnaire was used to assess respiratory symptoms. A multivariate logistic regression model was applied to examine the association between COPD and cognitive impairment with adjustment for potential confounding factors.

There was strong association between COPD and cognitive impairment in urban Chinese elderly population.

Steven T. DeKosky,  Oscar Lopez,  Lewis Kuller … (2005)
To determine whether coronary artery disease, peripheral arterial disease (PAD), or noninvasive markers of cardiovascular disease (CVD) predict the onset of dementia and Alzheimer's disease (AD). Longitudinal cohort study. Four U.S. communities. Men and women (N=3,602) with a brain magnetic resonance imaging (MRI) scan but no dementia were followed for 5.4 years. Participants with stroke were excluded. Neurologists and psychiatrists classified incident cases of dementia and subtype using neuropsychological tests, examination, medical records and informant interviews. CVD was defined at the time of the MRI scan. Noninvasive tests of CVD were assessed within 1 year of the MRI. Apolipoprotein E allele status, age, race, sex, education, Mini-Mental State Examination score, and income were assessed as potential confounders. The incidence of dementia was higher in those with prevalent CVD, particularly in the subgroup with PAD. The rate of AD was 34.4 per 1,000 person-years for those with a history of CVD, versus 22.2 per 1,000 person-years without a history of CVD (adjusted hazard ratio (HR)=1.3, 95% confidence interval (CI)=1.0-1.7). Rates of AD were highest in those with PAD (57.4 vs 23.7 per 100 person-years, adjusted HR=2.4, 95% CI=1.4-4.2). Results were similar with further exclusion of those with vascular dementia from the AD group. A gradient of increasing risk was noted with the extent of vascular disease. Older adults with CVD other than stroke had a higher risk of dementia and AD than did those without CVD. The risk was highest in people with PAD, suggesting that extensive peripheral atherosclerosis is a risk factor for AD.

Prevalence of mild cognitive impairment in an urban community in China: a cross-sectional analysis of the Shanghai Aging Study.

Ding Ding,  Qianhua Zhao,  Qihao Guo … (2015)
Substantial variations in the prevalence of mild cognitive impairment (MCI) have been reported, although mostly in Western countries. Less is known about MCI in the Chinese population.