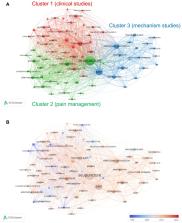 A bibliometric approach using quantitative analytical methods was applied to explore the development of research investigating acupuncture for the treatment of pain. This study also evaluated the current status of acupuncture analgesia with a visualization analysis of journal articles.

Analyses of 4595 original and review articles revealed that the total number of publications has continually increased over the last 20 years. The country producing the most articles in this field was the United States, followed by China and South Korea. A network analysis based on the cooccurrence of keywords revealed the following three major types of studies: clinical studies, pain management studies, and mechanism studies.

The present study evaluated research on acupuncture for pain control using bibliometric methods and revealed current trends in acupuncture analgesia research, as well as potential future hot spots of research in this field.

Acupuncture for patients with migraine: a randomized controlled trial.

Acupuncture analgesia: a review of its mechanisms of actions.

Jaung-Geng Lin,  Liang Chen (2007)
The mechanism of acupuncture analgesia (AA) has been widely explored since the 1970s. Early studies investigated the relationship between acupuncture and endogenous opiates (beta-endorphin, enkephalin, endomorphin and dynorphin). Before the 1990s, most experts agreed on the concept that in normal animal models, lower frequency electroacupuncture (EA) stimulates the release of beta-endorphin, enkephalin and endomorphin, which in turn activates the mu- and delta-opioid receptors, and that higher frequency EA stimulates dynorphin which activates the kappa-opioid receptor. Besides endogenous opiates, our studies have focused on serotonin. The serotoninergic descending inhibitory pathway is suggested to be an important mechanism of acupuncture analgesic, collaborating with endogenous opiates. Many efforts have been made to clarify these mechanisms, but to date no satisfactory consensus has been reached. In the late 1990s, researchers began to focus on the different analgesic effects of EA between normal and hyperalgesic animal models. Published data from these studies imply that normal and hyperalgesic animals respond differently to EA. Results from experiments on the anti-hyperalgesia effect of EA have raised a new issue about the influences of EA on receptors to excitatory amino acid in the spinal cord level. Results from various studies have shown that these receptors play a role in the mechanism of AA. Recently, research on the autonomic nervous system (ANS) seem to indicate its connection with acupuncture. The inflammatory reflex (via the ANS) might be a crucial part of anti-hyperalgesia elicited by acupuncture, and this reflex, which regulates the immune system in the organism, can elucidate not only the mechanism of AA but also the mechanism of acupuncture applied to other inflammatory conditions. Innovation of functional image study enables us to analyze the responses of cortex on living human body to acupuncture. However, results of these experiments are still controversial. After 30 years of acupuncture research, there are still many puzzles left to be solved regarding the mechanism of AA.