Catalogue of the type material of Scarabaeoidea (Coleoptera) deposited in the Research Institute of Evolutionary Biology, Tokyo, Japan 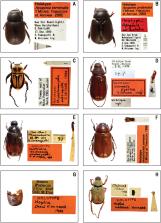 Phylogeny of the Oniticellini and Onthophagini dung beetles (Scarabaeidae, Scarabaeinae) from morphological evidence

T. Philips (2016)
Abstract A phylogenetic study was conducted to hypothesize relationships of most of the genera of the Oniticellini and Onthophagini for the first time using morphological characters from a diverse array of external and internal sclerites. The monophyly and sister relationship of both tribes was found using Bayesian and parsimony analyses with heavily to moderately weighted data. An alternative hypothesis based on parsimony analyses of unweighted or slightly weighted data show a paraphyletic Oniticellini without the Onthophagini , although recognition of the subtribe Helictopleurina as a tribe would eliminate non-monophyly. Of the three Oniticellini subtribes, the Helictopleurina and Drepanocerina are monophyletic. There is no support for the monophyly of the Oniticellina or the Onthophagini subtribe Alloscelina , as currently defined. The genus Liatongus is paraphyletic, while strong support was found for monophyly of the Madagascan genus, Helictopleurus . The genus Onthophagus is never monophyletic in any analysis performed. Two new subtribes are also proposed: Liatongina subtr. n. including the genus Liatongus and Attavicina subtr. n. including the genera Attavicinus and Paroniticellus . Topological evidence shows that the ancestral oniticellines and onthophagines were all coprophagous with alternative food sources evolving relatively recently. Both myrmecophily and termitophily probably evolved only once in the onthophagines. The phylogenetic analysis supports an African origin for the two tribes, with a relatively early age for the split of the Madagascar helictopleurines from the remaining oniticellines via dispersal. Furthermore, the presence of the oniticellines in the New World is hypothesized to be due to two relatively old dispersal events via Beringia and two relatively recent trans-Atlantic invasions of the Caribbean.