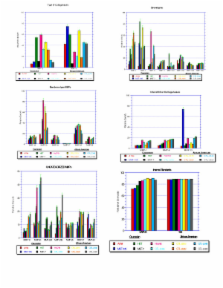 ScienceOpenPublisherPMC
Bookmark
There is no author summary for this article yet. Authors can add summaries to their articles on ScienceOpen to make them more accessible to a non-specialist audience.
To date there are 26 human matrix metalloproteinases (MMPs) which are classified according to their substrate specificity and structural similarities. The four major subgroups of MMPs are gelatinases, interstitial collagenases, stromelysins, and membrane-type matrix metalloproteinases (MT-MMPs). This study investigates the expression of 26 MMPs, which have been shown to play a role in cancer metastasis. Breast tissues and cell lines derived from African American patients and Caucasian patients were assayed to demonstrate alterations in the transcription of genes primarily responsible for degrading the extracellular matrix (ECM). The expression levels of the extracellular matrix and adhesion molecules were analyzed using the gene array technology. Steady state levels of mRNAs were validated by RT-PCR analysis. Total RNA was isolated from tissue and cell lines and used in the RT-PCR assays. From this data, differential expression of MMPs between 6 breast cancer cell lines and 2 non-cancer breast cell lines was demonstrated. We have performed an in vitro comparison of MMP expression and established differences in 12 MMPs (3, 7, 8, 9, 11–15, 23B, 26, and 28) expression between African American and Caucasian breast cell lines. Thus, evidence indicates that altered expression of MMPs may play a role in the aggressive phenotype seen in African American women.

Michael Duffy,  Teresa M Maguire,  Arnold DK Hill … (2000)
The matrix metalloproteinases (MMPs) are a family of zinc-dependent endopeptidases. Their primary function is degradation of proteins in the extracellular matrix. Currently, at least 19 members of this family are known to exist. Based on substrate specificity and domain organization, the MMPs can be loosely divided into four main groups: the interstitial collagenases, gelatinases, stromelysins and membrane-type MMPs. Recent data from model systems suggest that MMPs are involved in breast cancer initiation, invasion and metastasis. Consistent with their role in breast cancer progression, high levels of at least two MMPs (MMP-2 and stromelysin-3) have been found to correlate with poor prognosis in patients with breast cancer. Because MMPs are apparently involved in breast cancer initiation and dissemination, inhibition of these proteinases may be of value both in preventing breast cancer and in blocking metastasis of established tumours

Differences in breast cancer stage, treatment, and survival by race and ethnicity.

Donald Woodhouse,  L Liotta,  Rodrigo Chuaqui … (1997)
In the present article, the steps involved in the process of tumor metastasis are discussed. Several events are required for malignant cells to leave the primary tumor and proliferate at a distant site: vessel formation (angiogenesis), cell attachment, invasion (matrix degradation, cell motility), and cell proliferation. Molecular mechanisms underlying each of these steps are described. Based on blocking these processes, new anti-metastasis therapies are being developed.