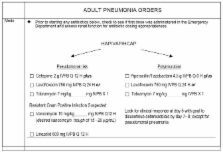 Guidelines for the management of adults with hospital-acquired (HAP), ventilator-associated (VAP), and healthcare-associated (HCAP) pneumonia were recently updated. These evidence-based guidelines emphasize early, appropriate antimicrobials, as well as, de-escalation of initial therapy based upon microbiologic cultures and clinical response of the patient, and to shorten duration of therapy to a minimum effective period.

To evaluate adherence to the nosocomial pneumonia guidelines before and after a multifaceted educational intervention in conjunction with the implementation of an adult pneumonia order set.

Thirty-three patients were evaluated pre-education: 5 transferred, 16 discharged, and 12 died. Thirty-one patients were evaluated post-education: 6 transferred, 21 discharged, and 4 died. The combined sixty-seven patients received two hundred forty-eight orders for forty-four unique antimicrobial agents from five different services. Appropriateness of antimicrobial prescribing, designated by adherence to the clinical practice guidelines, did not improve following an educational intervention. However, the adult pneumonia order set was utilized in forty-eight percent of the post-education group while only being implemented in nine percent of the pre-education group. The prescribing of single or additional antimicrobials, while utilizing the adult pneumonia order set, commonly resulted in overall noncompliance with the consensus guidelines.

This analysis showed that educational efforts alone were not effective in improving the appropriateness of prescribing empiric antimicrobial therapy in accordance with the guidelines. Prescribing compliance with pre-printed orders, in addition to periodic interactive educational interventions, should be addressed when introducing and maintaining adherence to new clinical practice guidelines.

Guidelines for the management of adults with hospital-acquired, ventilator-associated, and healthcare-associated pneumonia.

Neil R. Powe,  C Rand,  Khalil Abboud … (1999)
Despite wide promulgation, clinical practice guidelines have had limited effect on changing physician behavior. Little is known about the process and factors involved in changing physician practices in response to guidelines. To review barriers to physician adherence to clinical practice guidelines. We searched the MEDLINE, Educational Resources Information Center (ERIC), and HealthSTAR databases (January 1966 to January 1998); bibliographies; textbooks on health behavior or public health; and references supplied by experts to find English-language article titles that describe barriers to guideline adherence. Of 5658 articles initially identified, we selected 76 published studies describing at least 1 barrier to adherence to clinical practice guidelines, practice parameters, clinical policies, or national consensus statements. One investigator screened titles to identify candidate articles, then 2 investigators independently reviewed the texts to exclude articles that did not match the criteria. Differences were resolved by consensus with a third investigator. Two investigators organized barriers to adherence into a framework according to their effect on physician knowledge, attitudes, or behavior. This organization was validated by 3 additional investigators. The 76 articles included 120 different surveys investigating 293 potential barriers to physician guideline adherence, including awareness (n = 46), familiarity(n = 31), agreement (n = 33), self-efficacy (n = 19), outcome expectancy (n = 8), ability to overcome the inertia of previous practice (n = 14), and absence of external barriers to perform recommendations (n = 34). The majority of surveys (70 [58%] of 120) examined only 1 type of barrier. Studies on improving physician guideline adherence may not be generalizable, since barriers in one setting may not be present in another. Our review offers a differential diagnosis for why physicians do not follow practice guidelines, as well as a rational approach toward improving guideline adherence and a framework for future research.

Heather McDonald,  A Garg,  R. Brian Haynes … (2005)
Developers of health care software have attributed improvements in patient care to these applications. As with any health care intervention, such claims require confirmation in clinical trials. To review controlled trials assessing the effects of computerized clinical decision support systems (CDSSs) and to identify study characteristics predicting benefit. We updated our earlier reviews by searching the MEDLINE, EMBASE, Cochrane Library, Inspec, and ISI databases and consulting reference lists through September 2004. Authors of 64 primary studies confirmed data or provided additional information. We included randomized and nonrandomized controlled trials that evaluated the effect of a CDSS compared with care provided without a CDSS on practitioner performance or patient outcomes. Teams of 2 reviewers independently abstracted data on methods, setting, CDSS and patient characteristics, and outcomes. One hundred studies met our inclusion criteria. The number and methodologic quality of studies improved over time. The CDSS improved practitioner performance in 62 (64%) of the 97 studies assessing this outcome, including 4 (40%) of 10 diagnostic systems, 16 (76%) of 21 reminder systems, 23 (62%) of 37 disease management systems, and 19 (66%) of 29 drug-dosing or prescribing systems. Fifty-two trials assessed 1 or more patient outcomes, of which 7 trials (13%) reported improvements. Improved practitioner performance was associated with CDSSs that automatically prompted users compared with requiring users to activate the system (success in 73% of trials vs 47%; P = .02) and studies in which the authors also developed the CDSS software compared with studies in which the authors were not the developers (74% success vs 28%; respectively, P = .001). Many CDSSs improve practitioner performance. To date, the effects on patient outcomes remain understudied and, when studied, inconsistent.