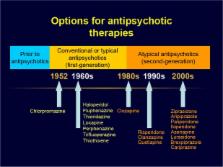 Antipsychotic agents, utilized for the treatment of a range of psychiatric disorders, differ substantially in terms of their pharmacology and adverse effect profiles. Incomplete and variable efficacy, differences in safety–tolerability, and highly heterogeneous response across individuals prompt development of new agents. Brexpiprazole is one of the two most recently introduced antipsychotic agents approved for the treatment of schizophrenia and as an adjunct for treatment of major depressive disorder. Its pharmacology, clinical trial data, and efficacy and side effects in comparison with other antipsychotic agents are discussed. Brexpiprazole is a dopamine D-2 partial agonist with potent activity at the serotonin 5HT 1A and 5HT 2A and noradrenergic alpha-1B and alpha-2C receptors. Placebo-controlled clinical trials in persons with schizophrenia support its efficacy in treating psychosis and preventing relapse. Short-term clinical trials also support its efficacy as an adjunct to antidepressants in treating major depressive disorder in individuals inadequately responsive to antidepressant treatment alone. Adverse effects include akathisia, gastrointestinal side effects, and moderate weight gain. The recommended oral dose of brexpiprazole is 2–4 mg/day in schizophrenia and 2–3 mg/day as adjunctive treatment in major depression. It must be titrated up to its target dose over 1–2 weeks and is effective in once-daily dosing. How brexpiprazole’s unique pharmacological profile will translate into clinically meaningful differences from other antipsychotic agents is unclear. Its place in our antipsychotic armamentarium and potential role in the treatment of schizophrenia and major depressive disorder will be determined by additional clinical data and experience.

Schizophrenia, "just the facts" 5. Treatment and prevention. Past, present, and future.

Rajiv Tandon,  M S Keshavan,  Henry Nasrallah (2010)
The introduction of second-generation antipsychotics and cognitive therapies for schizophrenia over the past two decades generated considerable optimism about possibilities for recovery. To what extent have these developments resulted in better outcomes for affected individuals? What is the current state of our science and how might we address the many unmet needs in the prevention and treatment of schizophrenia? We trace the evolution of various treatments for schizophrenia and summarize current knowledge about available pharmacological and psychosocial treatments. We consider the widely prevalent efficacy-effectiveness gap in the application of available treatments and note the significant variability in individual treatment response and outcome. We outline an individualized treatment approach which emphasizes careful monitoring and collaborative decision-making in the context of ongoing benefit-risk assessment. We note that the evolution of both pharmacological and psychosocial treatments thus far has been based principally on serendipity and intuition. In view of our improved understanding of the etiology and pathophysiology of schizophrenia, there is an opportunity to develop prevention strategies and treatments based on this enhanced knowledge. In this context, we discuss potential psychopathological treatment targets and enumerate current pharmacological and psychosocial development efforts directed at them. Considering the stages of schizophrenic illness, we review approaches to prevent progression from the pre-symptomatic high-risk to the prodrome to the initial psychotic phase to chronicity. In view of the heterogeneity of risk factors, we summarize approaches towards targeted prevention. We evaluate the potential contribution of pharmacogenomics and other biological markers in optimizing individual treatment and outcome in the future. (c) 2010 Elsevier B.V. All rights reserved.

The efficacy and safety of aripiprazole as adjunctive therapy in major depressive disorder: a second multicenter, randomized, double-blind, placebo-controlled study.

Helen Berman,  Maurizio Fava,  Daniel R. Marcus … (2008)
Nonresponse to one or more antidepressants is common and an important public health problem. This study evaluated the efficacy and safety of adjunctive aripiprazole or placebo to standard antidepressant therapy (ADT) in patients with major depressive disorder who showed an inadequate response to at least 1 and up to 3 historical and 1 additional prospective ADT. The study comprised a 7-28-day screening, an 8-week prospective treatment, and a 6-week randomization phase. During prospective treatment, patients experiencing a major depressive episode (17-item Hamilton Rating Scale for Depression total score > or = 18) received single-blind adjunctive placebo plus clinicians' choice of ADT (escitalopram, fluoxetine, paroxetine controlled-release, sertraline, or venlafaxine extended-release). Subjects with inadequate response were randomized to adjunctive placebo (n = 190) or adjunctive aripiprazole (n = 191) (starting dose 5 mg/d, dose adjustments 2-20 mg/d, mean end-point dose of 11.0 mg/d). The primary efficacy endpoint was the mean change in Montgomery-Asberg Depression Rating Scale total score from end of prospective treatment phase to end of randomized treatment phase (last observation carried forward). Mean change in Montgomery-Asberg Depression Rating Scale total score was significantly greater with adjunctive aripiprazole than placebo (-8.5 vs -5.7; P = 0.001). Remission rates were significantly greater with adjunctive aripiprazole than placebo (25.4% vs 15.2%; P = 0.016) as were response rates (32.4% vs 17.4%; P < 0.001). Adverse events occurring in 10% of patients or more with adjunctive placebo or aripiprazole were akathisia (4.2% vs 25.9%), headache (10.5% vs 9.0%), and fatigue (3.7% vs 10.1%). Incidence of adverse events leading to discontinuation was low (adjunctive placebo [1.1%] vs adjunctive aripiprazole [3.7%]). Aripiprazole is an effective and safe adjunctive therapy as demonstrated in this short-term study for patients who are nonresponsive to standard ADT.

Brexpiprazole I: in vitro and in vivo characterization of a novel serotonin-dopamine activity modulator.