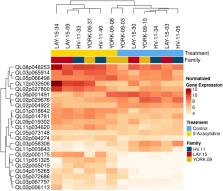 Epigenetic modifications such as DNA methylation, where methyl groups are added to cytosine base pairs, have the potential to impact phenotypic variation and gene expression, and could influence plant response to changing environments. One way to test this impact is through the application of chemical demethylation agents, such as 5-Azacytidine, which inhibit DNA methylation and lead to a partial reduction in DNA methylation across the genome. In this study, we treated 5-month-old seedlings of the tree, Quercus lobata, with foliar application of 5-Azacytidine to test whether a reduction in genome-wide methylation would cause differential gene expression and change phenotypic development. First, we demonstrate that demethylation treatment led to 3–6% absolute reductions and 6.7–43.2% relative reductions in genome-wide methylation across CG, CHG, and CHH sequence contexts, with CHH showing the strongest relative reduction. Seedlings treated with 5-Azacytidine showed a substantial reduction in new growth, which was less than half that of control seedlings. We tested whether this result could be due to impact of the treatment on the soil microbiome and found minimal differences in the soil microbiome between two groups, although with limited sample size. We found no significant differences in leaf fluctuating asymmetry ( i.e., deviations from bilateral symmetry), which has been found in other studies. Nonetheless, treated seedlings showed differential expression of a total of 23 genes. Overall, this study provides initial evidence that DNA methylation is involved in gene expression and phenotypic variation in seedlings and suggests that removal of DNA methylation affects plant development.

Assessing the Impact of Transgenerational Epigenetic Variation on Complex Traits

Transgenerational epigenetic instability is a source of novel methylation variants.

Mark A. Urich,  Ondrej Libiger,  Mathew G. Lewsey … (2011)
Epigenetic information, which may affect an organism's phenotype, can be stored and stably inherited in the form of cytosine DNA methylation. Changes in DNA methylation can produce meiotically stable epialleles that affect transcription and morphology, but the rates of spontaneous gain or loss of DNA methylation are unknown. We examined spontaneously occurring variation in DNA methylation in Arabidopsis thaliana plants propagated by single-seed descent for 30 generations. We identified 114,287 CG single methylation polymorphisms and 2485 CG differentially methylated regions (DMRs), both of which show patterns of divergence compared with the ancestral state. Thus, transgenerational epigenetic variation in DNA methylation may generate new allelic states that alter transcription, providing a mechanism for phenotypic diversity in the absence of genetic mutation.