Somatic RET mutation in a patient with pigmented adrenal pheochromocytoma 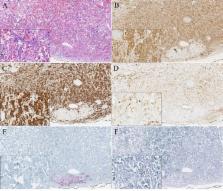 Pheochromocytomas (PCC) and paraganglioma (PGL) are rare neuroendocrine tumors arising from chromaffin cells of the neural crest. Mutations in the RET-proto-oncogene are associated with sporadic pheochromocytoma, familial or sporadic medullary thyroid carcinoma (MTC) and multiple endocrine neoplasia type 2. In the past, only few cases of pigmented PCCs, PGLs, and one case of pigmented MTC have been reported in the literature. Herein, we present the case of a 77-year old woman with a history of Tako-tsubo-cardiomyopathy and laboratory, as well as radiological, high suspicion of pheochromocytoma, who underwent left-sided adrenalectomy. The 3 cm tumor, which was located on the upper pole of the left adrenal, appeared highly pigmented with dark red to black color. Histologic examinations revealed highly pleomorphic cells with bizarre, huge hyperchromatic nuclei, that immunohistochemically were positive for chromogranin A and synaptophysin, focally positive for HMB45 and negative for melan A. These clinical and pathological features led to the diagnosis of the rare variant of a melanotic ‘black’ pheochromocytoma. In our case a somatic RET mutation in exon 16 (RET c.2753T>C, p.Met918Thy) was detected by targeted next generation sequencing. In summary, this case represents a rare variant of catecholamine-producing tumor with distinct histological features. A potential relationship between the phenotype, the cellular origin and the genetic alterations is discussed.

Eugene Mosharov,  Zsolt Tallóczy,  David Sulzer … (2008)
The most striking morphologic change in neurons during normal aging is the accumulation of autophagic vacuoles filled with lipofuscin or neuromelanin pigments. These organelles are similar to those containing the ceroid pigments associated with neurologic disorders, particularly in diseases caused by lysosomal dysfunction. The pigments arise from incompletely degraded proteins and lipids principally derived from the breakdown of mitochondria or products of oxidized catecholamines. Pigmented autophagic vacuoles may eventually occupy a major portion of the neuronal cell body volume because of resistance of the pigments to lysosomal degradation and/or inadequate fusion of the vacuoles with lysosomes. Although the formation of autophagic vacuoles via macroautophagy protects the neuron from cellular stress, accumulation of pigmented autophagic vacuoles may eventually interfere with normal degradative pathways and endocytic/secretory tasks such as appropriate response to growth factors.

Recommendations for somatic and germline genetic testing of single pheochromocytoma and paraganglioma based on findings from a series of 329 patients.

María Currás-Freixes,  Lucía Inglada-Pérez,  Veronika Mančíková … (2015)
Nowadays, 65-80% of pheochromocytoma and paraganglioma (PPGL) cases are explained by germline or somatic mutations in one of 22 genes. Several genetic testing algorithms have been proposed, but they usually exclude sporadic-PPGLs (S-PPGLs) and none include somatic testing. We aimed to genetically characterise S-PPGL cases and propose an evidence-based algorithm for genetic testing, prioritising DNA source.

Pigmented paraganglioma of the kidney: a case report

Ling Zhao,  Jie Luo,  Honglei Zhang … (2012)
Paragangliomas are rare neoplasms arising from undifferentiated cells of the primitive neural crest. We report a case of a 57-year-old patient with renal pigmented paraganglioma that was an incidental finding. Histopathological examination showed typical morphology of paraganglioma, as well as the unusual feature of large amounts of pigment in the cytoplasm of the tumor cells which was confirmed by bleached Fontana-Masson. Electron microscopy showed abundant, pleomorphic electron-dense granules consistent with neuromelanin. The tumor cells were positive for CD56 and chromogranin A, negative for HMB-45. The unique morphologic appearance represents divergent differentiation from neural crest. To our knowledge, the present case represents the first example of pigmented paraganglioma of the kidney. Virtual slides The virtual slide(s) for this article can be found here: http://www.diagnosticpathology.diagnomx.eu/vs/2017147293711495.