Development of an Onboard Robotic Platform for Embedded Programming Education 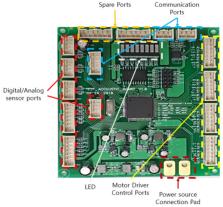 Robotics has been used as an attractive tool in diverse educational fields. A variety of robotic platforms have contributed to teaching practical embedded programming to engineering students at universities. However, most platforms only support content with a low level of programming skills and are unlikely to support a high level of embedded programming. This low association negatively affects students, such as incomprehension, decreased participation, dissatisfaction with course quality, etc. Therefore, this paper proposed a new robotic platform with relevant curricula to improve their effectiveness. The developed platform provided practical content used in mechatronics classes and the capability to operate a robot with a high level of embedded programming. To verify the effectiveness of the proposed platform, participants (undergraduates) examined course evaluations for educational programs based on the developed platform compared with the previous year’s class evaluation. The results showed that the proposed platform positively affects students’ intellectual ability (performance) and satisfaction in programming education.

A survey of socially interactive robots

Monty Krieger,  Laurent Keller,  J Billeter (2000)
One of the greatest challenges in robotics is to create machines that are able to interact with unpredictable environments in real time. A possible solution may be to use swarms of robots behaving in a self-organized manner, similar to workers in an ant colony. Efficient mechanisms of division of labour, in particular series-parallel operation and transfer of information among group members, are key components of the tremendous ecological success of ants. Here we show that the general principles regulating division of labour in ant colonies indeed allow the design of flexible, robust and effective robotic systems. Groups of robots using ant-inspired algorithms of decentralized control techniques foraged more efficiently and maintained higher levels of group energy than single robots. But the benefits of group living decreased in larger groups, most probably because of interference during foraging. Intriguingly, a similar relationship between group size and efficiency has been documented in social insects. Moreover, when food items were clustered, groups where robots could recruit other robots in an ant-like manner were more efficient than groups without information transfer, suggesting that group dynamics of swarms of robots may follow rules similar to those governing social insects.