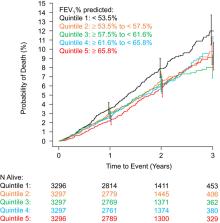 Chronic obstructive pulmonary disease (COPD) is one of the leading causes of death worldwide. Impaired lung function is associated with heightened risk for death, cardiovascular events, and COPD exacerbations. However, it is unclear if forced expiratory volume in one second (FEV 1) and forced vital capacity (FVC) differ in predictive value.

Our results suggest that FEV 1 is a stronger predictor for all-cause mortality than FVC in moderate COPD patients with heightened cardiovascular risk and that subjects with moderate COPD have very different risks.

Peter Barnes,  Peter Burney,  Edwin K Silverman … (2015)
Chronic obstructive pulmonary disease (COPD) is a common disease with high global morbidity and mortality. COPD is characterized by poorly reversible airway obstruction, which is confirmed by spirometry, and includes obstruction of the small airways (chronic obstructive bronchiolitis) and emphysema, which lead to air trapping and shortness of breath in response to physical exertion. The most common risk factor for the development of COPD is cigarette smoking, but other environmental factors, such as exposure to indoor air pollutants - especially in developing countries - might influence COPD risk. Not all smokers develop COPD and the reasons for disease susceptibility in these individuals have not been fully elucidated. Although the mechanisms underlying COPD remain poorly understood, the disease is associated with chronic inflammation that is usually corticosteroid resistant. In addition, COPD involves accelerated ageing of the lungs and an abnormal repair mechanism that might be driven by oxidative stress. Acute exacerbations, which are mainly triggered by viral or bacterial infections, are important as they are linked to a poor prognosis. The mainstay of the management of stable disease is the use of inhaled long-acting bronchodilators, whereas corticosteroids are beneficial primarily in patients who have coexisting features of asthma, such as eosinophilic inflammation and more reversibility of airway obstruction. Apart from smoking cessation, no treatments reduce disease progression. More research is needed to better understand disease mechanisms and to develop new treatments that reduce disease activity and progression.

The impact of obesity on US mortality levels: the importance of age and cohort factors in population estimates.

Gordon Powers,  Eric N Reither,  Bruce G. Link … (2013)
To estimate the percentage of excess death for US Black and White men and women associated with high body mass, we examined the combined effects of age variation in the obesity-mortality relationship and cohort variation in age-specific obesity prevalence. We examined 19 National Health Interview Survey waves linked to individual National Death Index mortality records, 1986-2006, for age and cohort patterns in the population-level association between obesity and US adult mortality. The estimated percentage of adult deaths between 1986 and 2006 associated with overweight and obesity was 5.0% and 15.6% for Black and White men, and 26.8% and 21.7% for Black and White women, respectively. We found a substantially stronger association than previous research between obesity and mortality risk at older ages, and an increasing percentage of mortality attributable to obesity across birth cohorts. Previous research has likely underestimated obesity's impact on US mortality. Methods attentive to cohort variation in obesity prevalence and age variation in obesity's effect on mortality risk suggest that obesity significantly shapes US mortality levels, placing it at the forefront of concern for public health action.