A New Method for Sperm Characterization for Infertility Treatment: Hypothesis Testing by Using Combination of Watershed Segmentation and Graph Theory 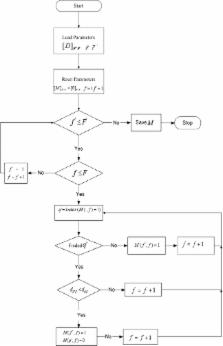 Shape and movement features of sperms are important parameters for infertility study and treatment. In this article, a new method is introduced for characterization sperms in microscopic videos. In this method, first a hypothesis framework is defined to distinguish sperms from other particles in captured video. Then decision about each hypothesis is done in following steps: Selecting some primary regions as candidates for sperms by watershed-based segmentation, pruning of some false candidates during successive frames using graph theory concept and finally confirming correct sperms by using their movement trajectories. Performance of the proposed method is evaluated on real captured images belongs to semen with high density of sperms. The obtained results show the proposed method may detect 97% of sperms in presence of 5% false detections and track 91% of moving sperms. Furthermore, it can be shown that better characterization of sperms in proposed algorithm doesn’t lead to extracting more false sperms compared to some present approaches.

K Shafique,  M. Shah (2005)
This paper presents a framework for finding point correspondences in monocular image sequences over multiple frames. The general problem of multiframe point correspondence is NP-hard for three or more frames. A polynomial time algorithm for a restriction of this problem is presented and is used as the basis of the proposed greedy algorithm for the general problem. The greedy nature of the proposed algorithm allows it to be used in real-time systems for tracking and surveillance, etc. In addition, the proposed algorithm deals with the problems of occlusion, missed detections, and false positives by using a single noniterative greedy optimization scheme and, hence, reduces the complexity of the overall algorithm as compared to most existing approaches where multiple heuristics are used for the same purpose. While most greedy algorithms for point tracking do not allow for entry and exit of the points from the scene, this is not a limitation for the proposed algorithm. Experiments with real and synthetic data over a wide range of scenarios and system parameters are presented to validate the claims about the performance of the proposed algorithm.

P. Benson Ham III,  R Kiss,  C Decaestecker … (2005)
In this paper, we propose a combination of mean-shift-based tracking processes to establish migrating cell trajectories through in vitro phase-contrast video microscopy. After a recapitulation on how the mean-shift algorithm permits efficient object tracking we describe the proposed extension and apply it to the in vitro cell tracking problem. In this application, the cells are unmarked (i.e., no fluorescent probe is used) and are observed under classical phase-contrast microscopy. By introducing an adaptive combination of several kernels, we address several problems such as variations in size and shape of the tracked objects (e.g., those occurring in the case of cell membrane extensions), the presence of incomplete (or noncontrasted) object boundaries, partially overlapping objects and object splitting (in the case of cell divisions or mitoses). Comparing the tracking results automatically obtained to those generated manually by a human expert, we tested the stability of the different algorithm parameters and their effects on the tracking results. We also show how the method is resistant to a decrease in image resolution and accidental defocusing (which may occur during long experiments, e.g., dozens of hours). Finally, we applied our methodology on cancer cell tracking and showed that cytochalasin-D significantly inhibits cell motility.

Marcelino T. Suzuki,  H Shibahara,  Y Hirano … (2001)
Some studies have suggested that computer-aided sperm analysis (CASA) estimates of concentration and movement characteristics of progressively motile spermatozoa are related to fertilization rates in vitro. However, it has also been suggested that the greater number of motility parameters assessed by CASA does not imply more precision in predicting fertility. This study was carried out to investigate the relationships between the CASA estimates and fertilization rates in vitro. Semen quality analysis was performed using CASA in 136 in vitro fertilization-embryo transfer (IVF-ET) cycles with at least 3 oocytes collected. The CASA estimates before and after swim-up were compared between 108 cycles with fertilization rate > 50% ("good" group) and 28 cycles with fertilization rate < or = 50% ("poor" group). Before swim-up, there were significant correlations between fertilization rates and CASA estimates, including amplitude of lateral head displacement (ALH) (r = .269), curvilinear velocity (VCL) (r = .297), straight line velocity (VSL) (r = .266), and rapid sprm movement (Rapid) (r = .243). There was also a significant correlation between the fertilization rates and straightness (STR) after swim-up (r = -0.178). As for sperm movement characteristics, there were significant differences of ALH (p < .005), VCL (p < .001), VSL (p < .005), and Rapid (p < .01) between "good" and "poor" groups before swim-up. After swim-up, there were significant differences of VCL (p < .005), average path velocity (VAP) (p < .005), and Rapid (p < .05) between the two groups. These results indicate that some of the CASA estimates provide reliable estimation of the fertilizing ability of human sperm. There were significant differences of the two sperm movement characteristics, including VCL and Rapid (before and after swim-up), indicating that the total distance traveled by rapid sperm movement might be important in human sperm fertilizing abilities.