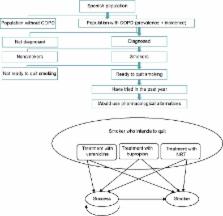 The aim of the study was to assess the budgetary impact of funding smoking-cessation drugs in COPD patients in Spain. A hybrid model (cohort and Markov) was developed for a 5-year time horizon. Only approved cessation drugs (varenicline, bupropion, and nicotine replacement therapy) were considered. Irrespective of the drug, the model allowed for an initial cessation attempt, and up to three additional attempts in case of failure or smoking relapse during a 5-year period. Drug effectiveness was based on controlled clinical trials. National Health System perspective was applied; therefore, only medical resources were included. The pharmaceutical costs for smoking-cessation drugs, extra medical follow-up as a consequence of public reimbursement, and annual savings for health costs avoided due to stopping smoking were considered. The model estimated that 17,756 COPD patients would stop smoking if public funding was available, compared with 1,303 without reimbursement. In the reimbursement scenario, the savings accounted for a total of €48.0 million, compensating for expenditures on drugs and medical visits (€40.4 million). Accumulated total additional savings in 5 years (€4.3 million) compared with the scenario without reimbursement was shown. Sensitivity analyses supported the results robustness. Funding smoking-cessation drugs in COPD patients seems to be an efficient option and a National Health System drug reimbursement scheme would represent a cost-saving policy in Spain.

Evidence of real-world effectiveness of a telephone quitline for smokers.

G Sánchez-Opazo,  J Soriano,  M Miravitlles … (2010)
We aimed to describe changes in the prevalence of chronic obstructive pulmonary disease (COPD) in Spain by means of a repeated cross-sectional design comparing two population-based studies conducted 10 yrs apart. We compared participants from IBERPOC (Estudio epidemiológico de EPOC en España) (n = 4,030), conducted in 1997, with those of EPI-SCAN (Epidemiologic Study of COPD in Spain) (n = 3,802), conducted in 2007. Poorly reversible airflow obstruction compatible with COPD was defined according to the old European Respiratory Society definitions. COPD prevalence in the population between 40 to 69 yrs of age dropped from 9.1% (95% CI 8.1-10.2%) in 1997 to 4.5% (95% CI 2.4-6.6%), a 50.4% decline. The distribution of COPD prevalence by severity also changed from 38.3% mild, 39.7% moderate and 22.0% severe in 1997, to 85.6% mild, 13.0% moderate and 1.4% severe in 2007, and in the 40-69 yr EPI-SCAN sub-sample to 84.3% mild, 15.0% moderate and 0.7% severe. Overall, underdiagnosis was reduced from 78% to 73% (not a significant difference) and undertreatment from 81% to 54% (p<0.05) within this 10-yr frame. The finding of a substantial reduction in the prevalence of COPD in Spain is unexpected, as were the observed changes in the severity distribution, and highlights the difficulties in comparisons between repeated cross-sectional surveys of spirometry in the population.