Lectotypification of the name Melastoma candidum f. albiflorum and its taxonomic status 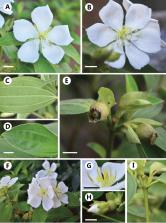 International Code of Nomenclature for algae, fungi, and plants

S S Renner,  K. Meyer (2001)
Rhexia, with 11 species in the Coastal Plain province of North America, is the only temperate zone endemic of the tropical eudicot family Melastomataceae. It is a member of the only pantropical tribe of that family, Melastomeae. Based on the chloroplast gene ndhF, we use a fossil-calibrated molecular clock to address the question of the geographic origin and age of Rhexia. Sequences from 37 species in 21 genera representing the tribe's geographical range were analyzed together with five outgroups. To obtain better clade support, another chloroplast region, the rpl16 intron, was added for 24 of the species. Parsimony analysis of the combined data and maximum-likelihood analysis of ndhF alone indicate that the deepest split is between Rhexia plus its sister group, a small Central American genus, and all other Melastomeae. Old World Melastomeae are monophyletic and nested within New World Melastomeae. Although likelihood-ratio tests of clock and nonclock substitution models for the full or moderately pruned datasets rejected the clock, these models yielded identical topologies (for 30 taxa) with few significantly different branch lengths as assessed by a Student's t-test. Age estimates obtained were 22 million years ago (Mya) for the divergence of Rhexia from its sister group, 12 Mya for the dispersal of Melastomeae from the New World to West Africa, and 1 Mya for the diversification of Melastoma in Southeast Asia. The only other genus of Melastomeae to have reached Southeast Asia from Africa or Madagascar is Osbeckia. The age and geographic distribution of fossils, which come from Miocene sites throughout Eurasia, suggest that Melastomeae once ranged from Eurasia across Beringia to North America from whence they reached South America and subsequently Africa and Southeast Asia. Climate deterioration led to their extinction in the Northern Hemisphere, with Rhexia possibly surviving in Coastal Plain refugia.