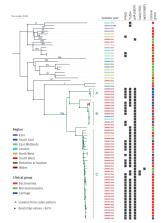 Aim: We aimed to characterise and estimate the prevalence of MRSA colonisation among PWID in Bristol and test evidence of a clonal outbreak.

Conclusions: MRSA colonisation in Bristol PWID is substantially elevated compared with general population estimates and there is evidence of clonal expansion, community-based transmission and increased infection risk related to the colonising strain. Targeted interventions, including community screening and suppression therapy, education and basic infection control are needed to reduce MRSA infections in PWID.

Viv Bewick, Liz Cheek, Jonathan Ball (2004)
This review introduces some commonly used methods for assessing the performance of a diagnostic test. The sensitivity, specificity and likelihood ratio of a test are discussed. The uses of the receiver operating characteristic curve and the area under the curve are explained.