Epithelioma Adenoides Cysticum: A Report of Two Cases in a Family 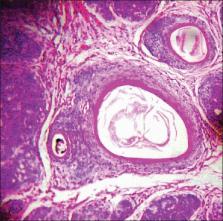 Epithelioma adenoides cysticum or multiple trichoepitheliomas are rare benign hamartomas arising from the hair germ. A 35-year-old female presented with multiple skin-colored firm papules and nodules mainly affecting the central face, scalp, and external ear canal since the age of 9 years. The lesions gradually increased with age. Her 13-year-old son also had similar but smaller lesions on the central face. Histopathology was consistent with trichoepithelioma.

The gene for multiple familial trichoepithelioma maps to chromosome 9p21.

K Hashimoto,  Paulo H. N. Harada,  M Ko (1996)
Multiple familial trichoepithelioma (MFT) is an autosomal dominant skin disease characterized by the presence of many small tumors predominantly on the face. To map the causative gene, we performed linkage analysis with microsatellite markers in three American families. We found a significant linkage of a gene for MFT to chromosome 9p2l. The maximum combined lod score was 3.31 at D9S171 at theta = 0. The disease locus was defined to a 4-cM region between IFNA and D9S126. Because several tumor suppressor genes including p16 and p15 have been mapped to this region, the gene for MFT may also be a tumor suppressor.