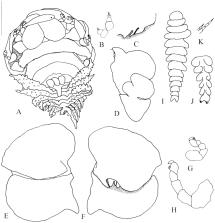 The parasitic isopod genus Tylokepon is recorded for the first time from the Mariana Islands and Australia. Tylokepon marianensis sp. n. is described from the Mariana Islands, infesting Thusaenys irami (Laurie, 1906). The holotype female differs from other known Tylokepon females by the tri-lobed projection on pereomere 6, almost smooth lateral plates and pleopods, shape of oostegite 1, and widely opened brood pouch. The host is first recorded for bearing bopyrids. The new record of T. bonnieri Stebbing, 1904 from Australia on the type host extends the range of this species from China and India. A table of localities and hosts and a key to all species of Tylokepon are provided.

Jason Williams,  Christopher Boyko (2012)
Parasitic isopods of Bopyroidea and Cryptoniscoidea (commonly referred to as epicarideans) are unique in using crustaceans as both intermediate and definitive hosts. In total, 795 epicarideans are known, representing ∼7.7% of described isopods. The rate of description of parasitic species has not matched that of free-living isopods and this disparity will likely continue due to the more cryptic nature of these parasites. Distribution patterns of epicarideans are influenced by a combination of their definitive (both benthic and pelagic species) and intermediate (pelagic copepod) host distributions, although host specificity is poorly known for most species. Among epicarideans, nearly all species in Bopyroidea are ectoparasitic on decapod hosts. Bopyrids are the most diverse taxon (605 species), with their highest diversity in the North West Pacific (139 species), East Asian Sea (120 species), and Central Indian Ocean (44 species). The diversity patterns of Cryptoniscoidea (99 species, endoparasites of a diverse assemblage of crustacean hosts) are distinct from bopyrids, with the greatest diversity of cryptoniscoids in the North East Atlantic (18 species) followed by the Antarctic, Mediterranean, and Arctic regions (13, 12, and 8 species, respectively). Dajidae (54 species, ectoparasites of shrimp, mysids, and euphausids) exhibits highest diversity in the Antarctic (7 species) with 14 species in the Arctic and North East Atlantic regions combined. Entoniscidae (37 species, endoparasites within anomuran, brachyuran and shrimp hosts) show highest diversity in the North West Pacific (10 species) and North East Atlantic (8 species). Most epicarideans are known from relatively shallow waters, although some bopyrids are known from depths below 4000 m. Lack of parasitic groups in certain geographic areas is likely a sampling artifact and we predict that the Central Indian Ocean and East Asian Sea (in particular, the Indo-Malay-Philippines Archipelago) hold a wealth of undescribed species, reflecting our knowledge of host diversity patterns.

The anomuran collections made by the Fish Hawk Expedition to Porto Rico.