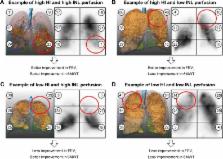 The exclusion of collateral ventilation (CV) and other factors affect the clinical success of endoscopic lung volume reduction (ELVR). However, despite its benefits, the outcome of ELVR remains difficult to predict. We investigated whether clinical success could be predicted by emphysema distribution assessed by computed tomography scan and baseline perfusion assessed by perfusion scintigraphy. Data from 57 patients with no CV in the target lobe (TL) were retrospectively analyzed after ELVR with valves. Pulmonary function tests (PFT), St George’s Respiratory Questionnaire (SGRQ), and 6-minute walk tests (6MWT) were performed on patients at baseline. The sample was grouped into high and low levels at the median of TL perfusion, ipsilateral nontarget lobe (INL) perfusion, and heterogeneity index (HI). These groups were analyzed for association with changes in outcome parameters from baseline to 3 months follow-up. Compared to baseline, patients showed significant improvements in PFT, SGRQ, and 6MWT (all P≤0.001). TL perfusion was not associated with changes in the outcome. High INL perfusion was significantly associated with increases in 6MWT ( P=0.014), and high HI was associated with increases in forced expiratory volume in 1 second (FEV 1), ( P=0.012). Likewise, there were significant correlations for INL perfusion and improvement of 6MWT ( r=0.35, P=0.03) and for HI and improvement in FEV 1 ( r=0.45, P=0.001). This study reveals new attributes that associate with positive outcomes for patient selection prior to ELVR. Patients with high perfusions in INL demonstrated greater improvements in 6MWT, while patients with high HI were more likely to respond in FEV 1.

A randomized study of endobronchial valves for advanced emphysema.

Kevin L Kovitz,  Geoffrey McLennan,   … (2010)
Endobronchial valves that allow air to escape from a pulmonary lobe but not enter it can induce a reduction in lobar volume that may thereby improve lung function and exercise tolerance in patients with pulmonary hyperinflation related to advanced emphysema. We compared the safety and efficacy of endobronchial-valve therapy in patients with heterogeneous emphysema versus standard medical care. Efficacy end points were percent changes in the forced expiratory volume in 1 second (FEV1) and the 6-minute walk test on intention-to-treat analysis. We assessed safety on the basis of the rate of a composite of six major complications. Of 321 enrolled patients, 220 were randomly assigned to receive endobronchial valves (EBV group) and 101 to receive standard medical care (control group). At 6 months, there was an increase of 4.3% in the FEV1 in the EBV group (an increase of 1.0 percentage point in the percent of the predicted value), as compared with a decrease of 2.5% in the control group (a decrease of 0.9 percentage point in the percent of the predicted value). Thus, there was a mean between-group difference of 6.8% in the FEV1 (P=0.005). Roughly similar between-group differences were observed for the 6-minute walk test. At 12 months, the rate of the complications composite was 10.3% in the EBV group versus 4.6% in the control group (P=0.17). At 90 days, in the EBV group, as compared with the control group, there were increased rates of exacerbation of chronic obstructive pulmonary disease (COPD) requiring hospitalization (7.9% vs. 1.1%, P=0.03) and hemoptysis (6.1% vs. 0%, P=0.01). The rate of pneumonia in the target lobe in the EBV group was 4.2% at 12 months. Greater radiographic evidence of emphysema heterogeneity and fissure completeness was associated with an enhanced response to treatment. Endobronchial-valve treatment for advanced heterogeneous emphysema induced modest improvements in lung function, exercise tolerance, and symptoms at the cost of more frequent exacerbations of COPD, pneumonia, and hemoptysis after implantation. (Funded by Pulmonx; ClinicalTrials.gov number, NCT00129584.)

Characterization of pulmonary vascular remodelling in smokers and patients with mild COPD.

J. Ramirez Vargas,  Raquel González,  J Barberá … (2002)
Intimal enlargement of pulmonary arteries is an early change in chronic obstructive pulmonary disease (COPD). The cellular and extracellular components that are involved in this enlargement are unknown. The present study was designed to characterize the structural changes occurring in pulmonary muscular arteries in the initial disease stages. Lung specimens from patients with moderate COPD (n=8; forced expiratory volume in one second (FEV1), 66 +/- 10% predicted) and smokers without airflow obstruction (n=7; FEV1, 86 +/- 6% pred), were investigated by histochemistry to characterize extracellular matrix proteins and by immunohistochemistry to identify intrinsic cells of the vascular wall. In both COPD patients and smokers, the majority of cells present in the enlarged intimas were stained by specific smooth muscle cell (SMC) markers. No staining with endothelial or fibroblast markers was shown. A proportion of SMCs did not stain with desmin, suggesting cellular heterogeneity in this population. Elastin was the most abundant extracellular matrix protein and collagen was seen in a lower proportion. The amount of collagen was related to the intimal thickness (p<0.001). The findings demonstrated smooth muscle cell proliferation, as well as elastin and collagen deposition, in the thickened intimas of pulmonary arteries in moderate chronic obstructive pulmonary disease patients and smokers, suggesting that these abnormalities may originate at an early stage in cigarette smoke-induced respiratory disease.

The 6-min walk distance: change over time and value as a predictor of survival in severe COPD.

H Cabral,  Hélène C. F. Côté,  V Pinto … (2003)
The 6-min walk distance (6MWD) is used to evaluate the functional capacity of patients with chronic obstructive pulmonary disease (COPD). The change in 6MWD over time and its correlation with changes in spirometry and survival are unclear. Patients (n=198) with severe COPD and 41 age-matched controls were followed for 2 yrs, and anthropometrics, spirometry, 6MWD and comorbidities were measured. The 6MWD decreased in the COPD group from 238 +/- 107 m to 218 +/- 112 m (-26 +/- 37 m x yr(-1)), and increased in the control group from 532 +/- 82 m to 549 +/- 86 m (12 +/- 25 m x yr(-1)). In both groups, there was a poor correlation with changes in forced expiratory volume in one second (FEV1). Nonsurvivors in the COPD group (42%) had a more pronounced change in the 6MWD (-40 versus -22 m x yr(-1)) but a similar change in FEV1 (118 versus 102 mL x yr(-1)). The 6MWD independently predicted survival, after accounting for age, body mass index, FEV1 and comorbidities. In severe chronic obstructive pulmonary disease, the 6-min walk distance predicts mortality better than other traditional markers of disease severity. Its measurement is useful in the comprehensive evaluation of patients with severe disease.