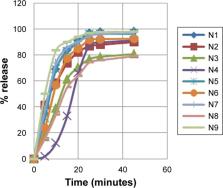 Pharmaceuticals play a pivotal role in maintaining human health and promoting well-being. However, safety, efficacy, and quality of the drugs should be ascertained to provide a desired pharmacological effect.

The aim of the present study was to determine the quality as well as the physicochemical equivalence of nine brands of norfloxacin tablets marketed in Jimma, Ethiopia.

Nine norfloxacin brands were subjected to in vitro tests associated with quality of tablet dosage form, and the tests were conducted according to procedures described in the United States Pharmacopeia (USP).

This study indicated that all brands of norfloxacin complied with the USP for uniformity of weight, friability, hardness, and assay of active ingredient. However, two of the nine brands evaluated failed to release 80% of their drug contents within 30 minutes as outlined in the USP. Correspondingly, all of the brands studied were within the specification for hardness test. Furthermore, different dissolution profile comparison methods have proven the similarity in dissolution profile of Negaflox and Norcin with the comparator product (Trizolin). Mathematical models-dependent approaches have shown that the drug release data fit well to the Weibull release model.

Atholl Johnston,  David Holt (2013)
Poor-quality medicines present a serious public health problem, particularly in emerging economies and developing countries, and may have a significant impact on the national clinical and economic burden. Attention has largely focused on the increasing availability of deliberately falsified drugs, but substandard medicines are also reaching patients because of poor manufacturing and quality-control practices in the production of genuine drugs (either branded or generic). Substandard medicines are widespread and represent a threat to health because they can inadvertently lead to healthcare failures, such as antibiotic resistance and the spread of disease within a community, as well as death or additional illness in individuals. This article reviews the different aspects of substandard drug formulation that can occur (for example, pharmacological variability between drug batches or between generic and originator drugs, incorrect drug quantity and presence of impurities). The possible means of addressing substandard manufacturing practices are also discussed. A concerted effort is required on the part of governments, drug manufacturers, charities and healthcare providers to ensure that only drugs of acceptable quality reach the patient.

Effect of compaction pressure on the dissolution efficiency of some direct compression systems.

The quality of essential antimicrobial and antimalarial drugs marketed in Rwanda and Tanzania: influence of tropical storage conditions on in vitro dissolution.

P Risha,  A Msami,  P Kayumba … (2004)
The quality of 33 formulations of essential antimicrobial and antimalarial drugs (amoxicillin capsules, metronidazole tablets, sulfamethoxazole/trimethoprim tablets, quinine tablets and sulphadoxine/pyrimethamine tablets) marketed in Rwanda and Tanzania was assessed and the influence of tropical storage conditions on potency and in vitro dissolution investigated. Drug content and in vitro dissolution were determined immediately after purchase and during 6-month storage under simulated tropical conditions (75% relative humidity, 40 degrees C) using the methods described in the USP 24 monographs on the drugs concerned. At the time of purchase, the drug content of all the formulations was within the limits recommended by the USP 24, but after 6-month storage, the drug content of one sulfamethoxazole/trimethoprim and one quinine formulation were found to be substandard. Immediately after purchase, four formulations (three sulfamethoxazole/trimethoprim and one sulphadoxine/pyrimethamine combination) failed the USP 24 dissolution test. Except for three metronidazole and one quinine formulations, dissolution tests performed after 6 months of storage under simulated tropical conditions showed that drug release remained within the USP 24 recommended values. In both countries, essential drug formulations met pharmacopoeial potency requirements, but some had a poor in vitro drug release profiles. Some of the formulations tested were not stable upon storage under simulated tropical conditions.