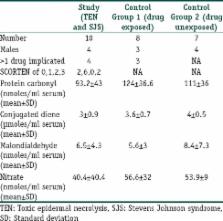 Oxidative and nitrosative stress caused by drug metabolism may be a trigger for keratinocyte apoptosis in the epidermis seen in toxic epidermal necrolysis (TEN) and Stevens Johnson syndrome (SJS).

To estimate oxidative damage in the serum and to examine the role of nitric oxide in mediating epidermal damage in patients with TEN and SJS.

A prospective study was conducted among TEN and SJS patients and controls in a tertiary care center between January 2006 and February 2010. Patients with a maculopapular drug rash without detachment of skin constituted the control group 1 (drug exposed). Patients without a drug rash constituted the control group 2 (drug unexposed). The serum values of protein carbonyls, malondialdehyde, conjugated diene and nitrates were measured. Two-group comparison with the non-parametric Mann–Whitney U test was used. Significance of differences if any was established using Pearson's Chi-square test.

There was no elevation of oxidative stress markers in patients with TEN and SJS as compared to the control population.

Inhibition of toxic epidermal necrolysis by blockade of CD95 with human intravenous immunoglobulin.

P Wehrli,  J-H Saurat,  J Tschopp … (1998)
Toxic epidermal necrolysis (TEN, Lyell's syndrome) is a severe adverse drug reaction in which keratinocytes die and large sections of epidermis separate from the dermis. Keratinocytes normally express the death receptor Fas (CD95); those from TEN patients were found to express lytically active Fas ligand (FasL). Antibodies present in pooled human intravenous immunoglobulins (IVIG) blocked Fas-mediated keratinocyte death in vitro. In a pilot study, 10 consecutive individuals with clinically and histologically confirmed TEN were treated with IVIG; disease progression was rapidly reversed and the outcome was favorable in all cases. Thus, Fas-FasL interactions are directly involved in the epidermal necrolysis of TEN, and IVIG may be an effective treatment.

Granulysin is a key mediator for disseminated keratinocyte death in Stevens-Johnson syndrome and toxic epidermal necrolysis.

Tsung-Hsun Yang,  Chien-Hung Chung,  Chao-Xia Chu … (2008)
Stevens-Johnson syndrome (SJS) and toxic epidermal necrolysis (TEN) are life-threatening adverse drug reactions characterized by massive epidermal necrosis, in which the specific danger signals involved remain unclear. Here we show that blister cells from skin lesions of SJS-TEN primarily consist of cytotoxic T lymphocytes (CTLs) and natural killer (NK) cells, and both blister fluids and cells were cytotoxic. Gene expression profiling identified granulysin as the most highly expressed cytotoxic molecule, confirmed by quantitative PCR and immunohistochemistry. Granulysin concentrations in the blister fluids were two to four orders of magnitude higher than perforin, granzyme B or soluble Fas ligand concentrations, and depleting granulysin reduced the cytotoxicity. Granulysin in the blister fluids was a 15-kDa secretory form, and injection of it into mouse skin resulted in features mimicking SJS-TEN. Our findings demonstrate that secretory granulysin is a key molecule responsible for the disseminated keratinocyte death in SJS-TEN and highlight a mechanism for CTL- or NK cell--mediated cytotoxicity that does not require direct cellular contact.

Aurélien Deniaud,  Martine Bagot,  Jean Claude Roujeau … (2004)
Toxic epidermal necrolysis (TEN) is a very rare but extremely severe drug reaction characterized by widespread apoptosis of epidermis with extensive blisters. We previously found drug-specific cytotoxic CD8 T lymphocytes in the blisters of a single patient. To confirm the role of drug specific cytotoxic lymphocytes in a larger series, to test the cytotoxicity on keratinocytes, and to look for cross-reactivity between chemically related drugs. The phenotype of lymphocytes present in the blister fluids of 6 patients with TEN was analyzed by flow cytometry. Cytotoxic functions were tested by chromium release assay on a variety of target cells (autologous or MHC class I-matched EBV-transformed lymphocytes, autologous keratinocytes) after nonspecific (CD3 monoclonal antibody) or specific (suspected and potentially cross-reactive drugs) activation. Blister lymphocytes were CD8 + HLA-DR + CLA + CD56 + . In all 6 cases, they were cytotoxic after nonspecific activation. A drug-specific cytotoxicity was observed in 4 cases (3 related to cotrimoxazole and 1 to carbamazepine) toward lymphocytes. Blister cells also killed IFN-gamma-activated autologous keratinocytes in the presence of drug in the 2 patients tested. Blister cells showed a strong immunoreactivity for granzyme B, and cytotoxicity was abolished by EGTA, but not by anti-Fas/CD95, suggesting perforin/granzyme-mediated killing. By using several sulfonamides for testing the specificity of the drug T-cell receptor interaction, we observed cross-reactivity only between 4 structurally closely related medications. These results strongly suggest that drug-specific, MHC class I-restricted, perforin/granzyme-mediated cytotoxicity probably has a primary role in TEN.