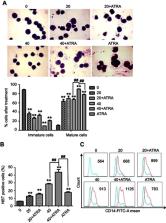 Purpose: This study aims to observe the effects of notopterol on the apoptosis and differentiation of HL-60 cells and to explore the underlying molecular mechanisms.

Results: Notopterol obviously inhibited the growth of HL-60 cells with an IC 50 value of 40.32 μM and remarkably reduced the number of colonies by 10, 20, and 40 µM. In addtion, notopterol induced the percentage of apoptotic HL-60 cells, reduced the mitochondrial membrane potential, decreased the protein expresstion of Bcl-2 and Mcl-1, and increased the expression of Bax, cleavage of caspase 9, caspase 3, and PARP. As for cell differentiation, notopterol clearly induced chromatin condensation; increased the nucleocytoplasmic ratio, nitroblue tetrazolium-positive cells, expression of CD14 and CD11b, and protein expression of c-Jun and Jun B, and decreased c-myc. Furthermore, notopterol induced the G0/G1 cell-cycle arrest as determined using flow cytometry, which may be related to the regulation of cell-cycle-related proteins p53, CDK2, CDK4, Cyclin D1, Cyclin E, and survivin. The combined use of notopterol and ATRA did not enhance the apoptotic effect as evidenced by cell viability test and Hoechst 33342. However, the combination of notopterol and ATRA enhanced the effect of inducing differentiation when compared with using either notopterol or ATRA alone, which can be evidenced by the increased nucleocytoplasmic ratio, NBT positive cells, and expression of CD14.

Elihu Estey,  Hartmut Döhner (2006)
Acute myeloid leukaemia (AML) is a heterogeneous clonal disorder of haemopoietic progenitor cells and the most common malignant myeloid disorder in adults. The median age at presentation for patients with AML is 70 years. In the past few years, research in molecular biology has been instrumental in deciphering the pathogenesis of the disease. Genetic defects are thought to be the most important factors in determining the response to chemotherapy and outcome. Whereas significant progress has been made in the treatment of younger adults, the prospects for elderly patients have remained dismal, with median survival times of only a few months. This difference is related to comorbidities associated with ageing and to disease biology. Current efforts in clinical research focus on the assessment of targeted therapies. Such new approaches will probably lead to an increase in the cure rate.

Apoptosis: why and how does it occur in biology?

Yusuf Yilmaz,  Engin Ulukaya,  Ceyda Acilan (2011)
The literature on apoptosis has grown tremendously in recent years, and the mechanisms that are involved in this programmed cell death pathway have been enlightened. It is now known that apoptosis takes place starting from early development to adult stage for the homeostasis of multicellular organisms, during disease development and in response to different stimuli in many different systems. In this review, we attempted to summarize the current knowledge on the circumstances and the mechanisms that lead to induction of apoptosis, while going over the molecular details of the modulator and mediators of apoptosis as well as drawing the lines between programmed and non-programmed cell death pathways. The review will particularly focus on Bcl-2 family proteins, the role of different caspases in the process of apoptosis, and their inhibitors as well as the importance of apoptosis during different disease states. Understanding the molecular mechanisms involved in apoptosis better will make a big impact on human diseases, particularly cancer, and its management in the clinics. Copyright © 2011 John Wiley & Sons, Ltd.