The Law of Attrition 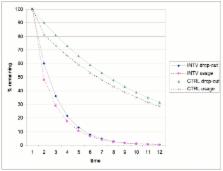 In an ongoing effort of this Journal to develop and further the theories, models, and best practices around eHealth research, this paper argues for the need for a “science of attrition”, that is, a need to develop models for discontinuation of eHealth applications and the related phenomenon of participants dropping out of eHealth trials. What I call “law of attrition” here is the observation that in any eHealth trial a substantial proportion of users drop out before completion or stop using the appplication. This feature of eHealth trials is a distinct characteristic compared to, for example, drug trials. The traditional clinical trial and evidence-based medicine paradigm stipulates that high dropout rates make trials less believable. Consequently eHealth researchers tend to gloss over high dropout rates, or not to publish their study results at all, as they see their studies as failures. However, for many eHealth trials, in particular those conducted on the Internet and in particular with self-help applications, high dropout rates may be a natural and typical feature. Usage metrics and determinants of attrition should be highlighted, measured, analyzed, and discussed. This also includes analyzing and reporting the characteristics of the subpopulation for which the application eventually “works”, ie, those who stay in the trial and use it. For the question of what works and what does not, such attrition measures are as important to report as pure efficacy measures from intention-to-treat (ITT) analyses. In cases of high dropout rates efficacy measures underestimate the impact of an application on a population which continues to use it. Methods of analyzing attrition curves can be drawn from survival analysis methods, eg, the Kaplan-Meier analysis and proportional hazards regression analysis (Cox model). Measures to be reported include the relative risk of dropping out or of stopping the use of an application, as well as a “usage half-life”, and models reporting demographic and other factors predicting usage discontinuation in a population. Differential dropout or usage rates between two interventions could be a standard metric for the “usability efficacy” of a system. A “run-in and withdrawal” trial design is suggested as a methodological innovation for Internet-based trials with a high number of initial dropouts/nonusers and a stable group of hardcore users.

Helen Christensen,  Kathleen Griffiths,  Ailsa Korten … (2004)
Background In randomized controlled trials Internet sites have been shown to be effective in the treatment of depression and anxiety. However, it is unclear if the positive effects demonstrated in these trials transfer to community users of such sites. Objective To compare anxiety and depression outcomes for spontaneous visitors to a publicly accessible cognitive behavior therapy website (MoodGYM) (http://moodgym.anu.edu.au) with outcomes achieved through a randomized controlled efficacy trial of the same site. Methods All community visitors to the MoodGYM site between April 2001 and September 2003 were sampled: 182 participants in the BlueMood Trial who had been randomly assigned to the MoodGYM site as part of a large trial and 19607 visitors (public registrants) to the site. Symptom assessments (quizzes) were repeated within the website intervention to allow the examination of change in symptoms across modules. Outcome variables were (1) age, gender, initial depression severity scores, and number of assessments attempted, and (2) symptom change measures based on Goldberg anxiety and depression scores recorded on a least two occasions. Results Public registrants did not differ from trial participants in gender, age, or initial level of depression, which was high for both groups relative to previously published epidemiological data sets. Trial participants completed more assessments. No significant differences in anxiety or depression change scores were observed, with both public registrants and trial participants improving through the training program. Conclusions Public registrants to a cognitive behavior therapy website show significant change in anxiety and depression symptoms. The extent of change does not differ from that exhibited by participants enrolled on the website for a randomized controlled trial.