Effects of prenatal exposure to temephos on behavior and social interaction 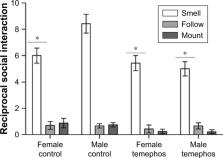 The neurodevelopment period is susceptible to alterations by genetic and environmental factors, such as the exposure to organophosphates (OP). The OP is neurotoxic and has been associated with neurological diseases pathophysiology. The OP temephos is widely used against Aedes aegypti in Brazil’s public health programs.

To evaluate behavioral effects of prenatal exposition to temephos in Wistar rats.

These results are similar to the altered behavior presented in some neurobiological diseases models, like Attention Deficit Hyperactivity Disorder and Autism Spectrum Disorders, and this study may bring a red alert to the large use of temephos in Brazil, due to the damage caused by its exposure.

Maryse F. Bouchard,  Jonathan Chevrier,  Kim G. Harley … (2011)
Context: Organophosphate (OP) pesticides are neurotoxic at high doses. Few studies have examined whether chronic exposure at lower levels could adversely affect children’s cognitive development. Objective: We examined associations between prenatal and postnatal exposure to OP pesticides and cognitive abilities in school-age children. Methods: We conducted a birth cohort study (Center for the Health Assessment of Mothers and Children of Salinas study) among predominantly Latino farmworker families from an agricultural community in California. We assessed exposure to OP pesticides by measuring dialkyl phosphate (DAP) metabolites in urine collected during pregnancy and from children at 6 months and 1, 2, 3.5, and 5 years of age. We administered the Wechsler Intelligence Scale for Children, 4th edition, to 329 children 7 years of age. Analyses were adjusted for maternal education and intelligence, Home Observation for Measurement of the Environment score, and language of cognitive assessment. Results: Urinary DAP concentrations measured during the first and second half of pregnancy had similar relations to cognitive scores, so we used the average of concentrations measured during pregnancy in further analyses. Averaged maternal DAP concentrations were associated with poorer scores for Working Memory, Processing Speed, Verbal Comprehension, Perceptual Reasoning, and Full-Scale intelligence quotient (IQ). Children in the highest quintile of maternal DAP concentrations had an average deficit of 7.0 IQ points compared with those in the lowest quintile. However, children’s urinary DAP concentrations were not consistently associated with cognitive scores. Conclusions: Prenatal but not postnatal urinary DAP concentrations were associated with poorer intellectual development in 7-year-old children. Maternal urinary DAP concentrations in the present study were higher but nonetheless within the range of levels measured in the general U.S. population.

Emotional behavior in the rat. I. Defecation and urination as measures of individual differences in emotionality.

Theodore A. Slotkin (2004)
Acetylcholine and other neurotransmitters play unique trophic roles in brain development. Accordingly, drugs and environmental toxicants that promote or interfere with neurotransmitter function evoke neurodevelopmental abnormalities by disrupting the timing or intensity of neurotrophic actions. The current review discusses three exposure scenarios involving acetylcholine systems: nicotine from maternal smoking during pregnancy, exposure to environmental tobacco smoke (ETS), and exposure to the organophosphate insecticide, chlorpyrifos (CPF). All three have long-term, adverse effects on specific processes involved in brain cell replication and differentiation, synaptic development and function, and ultimately behavioral performance. Many of these effects can be traced to the sequence of cellular events surrounding the trophic role of acetylcholine acting on its specific cellular receptors and associated signaling cascades. However, for chlorpyrifos, additional noncholinergic mechanisms appear to be critical in establishing the period of developmental vulnerability, the sites and type of neural damage, and the eventual outcome. New findings indicate that developmental neurotoxicity extends to late phases of brain maturation including adolescence. Novel in vitro and in vivo exposure models are being developed to uncover heretofore unsuspected mechanisms and targets for developmental neurotoxicants.