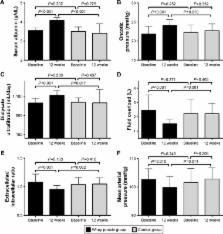 Hypertension and hypoalbuminemia are common risk factors for cardiovascular complications in peritoneal dialysis (PD) patients. Data are limited regarding the effects of whey protein consumption on blood pressure in this population. The aim of the present study was to examine if whey protein supplementation for 12 weeks to hypoalbuminemic PD patients affects their blood pressure.

A fermented milk high in bioactive peptides has a blood pressure-lowering effect in hypertensive subjects.

Tuija Poussa,  L Seppo,  Riitta Korpela … (2003)
Angiotensin-converting enzyme (ACE; EC 3.4.15.1) plays a dual role in the regulation of hypertension: it catalyzes the production of the vasoconstrictor angiotensin II and it inactivates the vasodilator bradykinin. By inhibiting these processes, ACE inhibitors have antihypertensive effects. Peptides derived from milk proteins can have ACE-inhibiting properties and may thus be used as antihypertensive components. We evaluated the long-term blood pressure-lowering effect of milk fermented by Lactobacillus helveticus LBK-16H in hypertensive subjects. In a randomized placebo-controlled study, 39 hypertensive patients received 150 mL/d of either L. helveticus LBK-16H fermented milk or a control product for 21 wk after a 2-wk run-in period. During the run-in period, the average baseline diastolic and systolic blood pressure values were 155 and 97 mm Hg, respectively, in the test product group and 152 and 96 mm Hg, respectively, in the control group. After the run-in period, blood pressure was measured at home on the same day every week with the use of an automatic blood pressure recorder. There was a mean difference of 6.7 +/- 3.0 mm Hg in systolic blood pressure (P = 0.030) and of 3.6 +/- 1.9 mm Hg (P = 0.059) in diastolic blood pressure between the test product and control groups. Demographic factors had no significant effect on the responses. L. helveticus LBK-16H fermented milk containing bioactive peptides in normal daily use has a blood pressure-lowering effect in hypertensive subjects.

A placebo-controlled study of the effect of sour milk on blood pressure in hypertensive subjects.

Rodrigo Nakamura,  M Ohni,  Mitsuo Yamamoto … (1996)
A placebo-controlled study was conducted to test the effect of Calpis (Calpis Food Industry Co, Ltd, Tokyo, Japan) sour milk, i.e., a milk fermented with a starter containing Lactobacillus helveticus and Saccharomyces cerevisiae, on the blood pressure of 30 elderly hypertensive patients, most of whom were taking antihypertensive medication. Subjects were randomly assigned to two groups. One group ingested daily 95 mL of the sour milk for 8 wk, and the other group ingested the same amount of artificially acidified milk as a placebo for 8 wk. In the sour-milk group, systolic blood pressure decreased significantly 4 and 8 wk after ingestion, by 9.4 +/- 3.6 mm Hg (mean+/- SE, P < 0.05) and 14.1 +/- 3.1 mm Hg (P < 0.01), respectively. The diastolic blood pressure also decreased significantly, by 6.9 +/- 2.2 mm Hg (P < 0.01), by 8 wk after ingestion of the sour milk began. No significant changes in blood pressure were observed in the placebo group. The decrease in systolic and diastolic blood pressure in the sour-milk group tended to be greater than in the placebo group. No marked changes were observed in other indexes, including pulse rate, body weight, and blood serum variables in both groups.