Does pulse oximeter use impact health outcomes? A systematic review 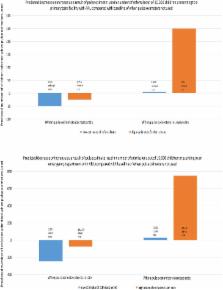 The evidence is low quality and hypoxaemia definitions varied across studies, but the evidence suggests pulse oximeter use with children can reduce mortality rates (when combined with improved oxygen administration) and length of emergency department stay, increase admission of children with previously unrecognised hypoxaemia, and change physicians’ decisions on illness severity, diagnosis and treatment. Pulse oximeter use generally increased resource utilisation.

As international organisations are investing in programmes to increase pulse oximeter use in low-income settings, more research is needed on the optimal use of pulse oximeters (eg, appropriate oxygen saturation thresholds), and how pulse oximeter use affects referral and admission rates, length of stay, resource utilisation and health outcomes.

Clinical practice guideline: the diagnosis, management, and prevention of bronchiolitis.

Shawn Ralston,  Allan Lieberthal,  H Meissner … (2014)
This guideline is a revision of the clinical practice guideline, "Diagnosis and Management of Bronchiolitis," published by the American Academy of Pediatrics in 2006. The guideline applies to children from 1 through 23 months of age. Other exclusions are noted. Each key action statement indicates level of evidence, benefit-harm relationship, and level of recommendation. Key action statements are as follows:

Bronchiolitis: Recommendations for diagnosis, monitoring and management of children one to 24 months of age.

Jeremy N Friedman,  Michael Rieder,  Jennifer M Walton (2014)
Bronchiolitis is the most common reason for admission to hospital in the first year of life. There is tremendous variation in the clinical management of this condition across Canada and around the world, including significant use of unnecessary tests and ineffective therapies. This statement pertains to generally healthy children ≤2 years of age with bronchiolitis. The diagnosis of bronchiolitis is based primarily on the history of illness and physical examination findings. Laboratory investigations are generally unhelpful. Bronchiolitis is a self-limiting disease, usually managed with supportive care at home. Groups at high risk for severe disease are described and guidelines for admission to hospital are presented. Evidence for the efficacy of various therapies is discussed and recommendations are made for management. Monitoring requirements and discharge readiness from hospital are also discussed.

Mike English,  David Gathara,  Stephen Mwinga … (2014)
Objective In global health considerable attention is focused on the search for innovations; however, reports tracking their adoption in routine hospital settings from low-income countries are absent. Design and setting We used data collected on a consistent panel of indicators during four separate cross-sectional, hospital surveys in Kenya to track changes over a period of 11 years (2002–2012). Main outcome measures Basic resource availability, use of diagnostics and uptake of recommended practices. Results There appeared little change in availability of a panel of 28 basic resources (median 71% in 2002 to 82% in 2012) although availability of specific feeds for severe malnutrition and vitamin K improved. Use of blood glucose and HIV testing increased but remained inappropriately low throughout. Commonly (malaria) and uncommonly (lumbar puncture) performed diagnostic tests frequently failed to inform practice while pulse oximetry, a simple and cheap technology, was rarely available even in 2012. However, increasing adherence to prescribing guidance occurred during a period from 2006 to 2012 in which efforts were made to disseminate guidelines. Conclusions Findings suggest changes in clinical practices possibly linked to dissemination of guidelines at reasonable scale. However, full availability of basic resources was not attained and major gaps likely exist between the potential and actual impacts of simple diagnostics and technologies representing problems with availability, adoption and successful utilisation. These findings are relevant to debates on scaling up in low-income settings and to those developing novel therapeutic or diagnostic interventions.