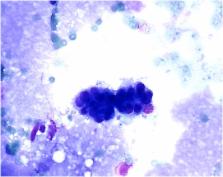 Neurocutaneous melanosis (NCM) is a sporadic condition characterised by congenital melanocytic nevi and melanocytic thickening of the leptomeninges. It is believed to result from congenital dysplasia of melanin-producing cells within the skin and leptomeninges. The management of cutaneous manifestations remains controversial; for neurological manifestations, outcome remains poor even with the use of radiotherapy and chemotherapy.

We describe the case of a 5-month-old boy who presented with giant congenital melanocytic nevus and hydrocephalus. MR imaging and CSF immunohistochemistry confirmed leptomeningeal melanosis. We discuss the diagnosis, treatment and prognosis of this rare disorder in the light of recent published literature.

Patient required placement of right-sided ventriculoperitoneal shunt to control hydrocephalus. The patient tolerated the procedure well and was discharged home with normal neurological function. A presumptive diagnosis of NCM was made based on the MR characteristics, CSF cytology and clinical presentation. He received trametinib, a MAPK/Erk kinase inhibitor for 7 months. At 30 months of age, he developed left-sided weakness and status epilepticus requiring paediatric intensive care unit admission and ventilator support. The patient eventually succumbed to malignant transformation of leptomeningeal disease.

Cutaneous manifestations of NCM are usually congenital, and neurological manifestations develop early in life. Patients with large or multiple congenital nevi should therefore be investigated early to facilitate treatment. MR imaging is the investigation of choice which can further assist in performing biopsy. Symptomatic NCM is refractory to radiotherapy and chemotherapy and has a poor prognosis. A multidisciplinary approach is necessary in the management of NCM patients.

Veronica Kinsler,  Anna C. Thomas,  Miho Ishida … (2013)
Congenital melanocytic nevi (CMN) can be associated with neurological abnormalities and an increased risk of melanoma. Mutations in NRAS, BRAF, and Tp53 have been described in individual CMN samples; however, their role in the pathogenesis of multiple CMN within the same subject and development of associated features has not been clear. We hypothesized that a single postzygotic mutation in NRAS could be responsible for multiple CMN in the same individual, as well as for melanocytic and nonmelanocytic central nervous system (CNS) lesions. From 15 patients, 55 samples with multiple CMN were sequenced after site-directed mutagenesis and enzymatic digestion of the wild-type allele. Oncogenic missense mutations in codon 61 of NRAS were found in affected neurological and cutaneous tissues of 12 out of 15 patients, but were absent from unaffected tissues and blood, consistent with NRAS mutation mosaicism. In 10 patients, the mutation was consistently c.181C>A, p.Q61K, and in 2 patients c.182A>G, p.Q61R. All 11 non-melanocytic and melanocytic CNS samples from 5 patients were mutation positive, despite NRAS rarely being reported as mutated in CNS tumors. Loss of heterozygosity was associated with the onset of melanoma in two cases, implying a multistep progression to malignancy. These results suggest that single postzygotic NRAS mutations are responsible for multiple CMN and associated neurological lesions in the majority of cases.

Neurocutaneous melanosis: definition and review of the literature.

Julie N. Kadonaga,  Ilona Frieden (1991)
Neurocutaneous melanosis is a rare congenital syndrome characterized by the presence of large or multiple congenital melanocytic nevi and benign or malignant pigment cell tumors of the leptomeninges. The syndrome is thought to represent an error in the morphogenesis of the embryonal neuroectoderm. We review 39 reported cases of neurocutaneous melanosis and propose revised criteria for diagnosis. Most patients with neurocutaneous melanosis presented in the first 2 years of life with neurologic manifestations of increased intracranial pressure, mass lesions, or spinal cord compression. Leptomeningeal melanoma was present in 62% of the cases, but even in the absence of melanoma, symptomatic neurocutaneous melanosis had an extremely poor prognosis. Useful diagnostic procedures include cerebrospinal fluid cytology and magnetic resonance imaging with gadolinium contrast. Patients may be aided by palliative measures such as shunt placement to reduce intracranial pressure. Dermatologists in their follow-up of patients with large or multiple congenital melanocytic nevi should be aware of this condition, to aid in prompt diagnosis and because the treatment of cutaneous lesions may be altered in the presence of symptomatic neurocutaneous melanosis.

Douglas Johnson,  Igor Puzanov (2015)
NRAS mutations in codons 12, 13, and 61 arise in 15-20 % of all melanomas. These alterations have been associated with aggressive clinical behavior and a poor prognosis. Until recently, there has been a paucity of promising genetically targeted therapy approaches for NRAS-mutant melanoma (and RAS-mutant malignancies in general). MEK inhibitors, particularly binimetinib, have shown activity in this cohort. Based on pre-clinical and early clinical studies, combining MEK inhibitors with agents inhibiting the cell cycling and the PI3K-AKT pathway appears to provide additional benefit. In particular, a strategy of MEK inhibition and CDK4/6 inhibition is likely to be a viable treatment option in the future, and is the most promising genetically targeted treatment strategy for NRAS-mutant melanoma developed to date. In addition, immune-based therapies have shown increasing activity in advanced melanoma and may be particularly effective in those with NRAS mutations. Combination strategies of immune and targeted therapies may also play a role in the future although clinical trials testing these approaches are in early stages.