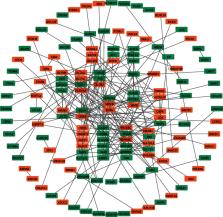 Colorectal cancer (CRC) is the third most common cancer in the world, and most of them are adenocarcinomas. CRC could be classified as colon adenocarcinoma (COAD) and rectum adenocarcinoma (READ) according to the original tumorigenesis position. Increasing evidences indicated that microRNAs (miRNAs) play an important role in the occurrence of multiple tumors.

In this study, we found several candidate prognostic biomarkers which have been identified in various cancers and also found several new prognosis biomarkers of COAD and READ. In conclusion, this analysis based on theoretical knowledge and clinical outcomes we have done needs further confirmation by more researches.

miRDB: an online database for prediction of functional microRNA targets

Mark Buunen, Ruben Veldkamp, Wim Hop … (2009)
Laparoscopic surgery for colon cancer has been proven safe, but debate continues over whether the available long-term survival data justify implementation of laparoscopic techniques in surgery for colon cancer. The aim of the COlon cancer Laparoscopic or Open Resection (COLOR) trial was to compare 3-year disease-free survival and overall survival after laparoscopic and open resection of solitary colon cancer. Between March 7, 1997, and March 6, 2003, patients recruited from 29 European hospitals with a solitary cancer of the right or left colon and a body-mass index up to 30 kg/m(2) were randomly assigned to either laparoscopic or open surgery as curative treatment in this non-inferiority randomised trial. Disease-free survival at 3 years after surgery was the primary outcome, with a prespecified non-inferiority boundary at 7% difference between groups. Secondary outcomes were short-term morbidity and mortality, number of positive resection margins, local recurrence, port-site or wound-site recurrence, and blood loss during surgery. Neither patients nor health-care providers were blinded to patient groupings. Analysis was by intention-to-treat. This trial is registered with ClinicalTrials.gov, number NCT00387842. During the recruitment period, 1248 patients were randomly assigned to either open surgery (n=621) or laparoscopic surgery (n=627). 172 were excluded after randomisation, mainly because of the presence of distant metastases or benign disease, leaving 1076 patients eligible for analysis (542 assigned open surgery and 534 assigned laparoscopic surgery). Median follow-up was 53 months (range 0.03-60). Positive resection margins, number of lymph nodes removed, and morbidity and mortality were similar in both groups. The combined 3-year disease-free survival for all stages was 74.2% (95% CI 70.4-78.0) in the laparoscopic group and 76.2% (72.6-79.8) in the open-surgery group (p=0.70 by log-rank test); the difference in disease-free survival after 3 years was 2.0% (95% CI -3.2 to 7.2). The hazard ratio (HR) for disease-free survival (open vs laparoscopic surgery) was 0.92 (95% CI 0.74-1.15). The combined 3-year overall survival for all stages was 81.8% (78.4-85.1) in the laparoscopic group and 84.2% (81.1-87.3) in the open-surgery group (p=0.45 by log-rank test); the difference in overall survival after 3 years was 2.4% (95% CI -2.1 to 7.0; HR 0.95 [0.74-1.22]). Our trial could not rule out a difference in disease-free survival at 3 years in favour of open colectomy because the upper limit of the 95% CI for the difference just exceeded the predetermined non-inferiority boundary of 7%. However, the difference in disease-free survival between groups was small and, we believe, clinically acceptable, justifying the implementation of laparoscopic surgery into daily practice. Further studies should address whether laparoscopic surgery is superior to open surgery in this setting.

Downregulation of miR-486-5p contributes to tumor progression and metastasis by targeting protumorigenic ARHGAP5 in lung cancer.