Frozen Zoo: a collection of permafrost samples containing viable protists and their viruses 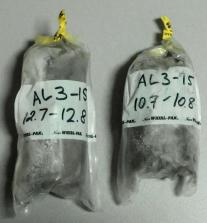 Permafrost, frozen ground cemented with ice, occupies about a quarter of the Earth’s hard surface and reaches up to 1000 metres depth. Due to constant subzero temperatures, permafrost represents a unique record of past epochs, whenever it comes to accumulated methane, oxygen isotope ratio or stored mummies of animals. Permafrost is also a unique environment where cryptobiotic stages of different microorganisms are trapped and stored alive for up to hundreds of thousands of years. Several protist strains and two giant protist viruses isolated from permafrost cores have been already described.

In this paper, we describe a collection of 35 amoeboid protist strains isolated from the samples of Holocene and Pleistocene permanently frozen sediments. These samples are stored at −18°C in the Soil Cryology Lab, Pushchino, Russia and may be used for further studies and isolation attempts. The collection strains are maintained in liquid media and may be available upon request. The paper also presents a dataset which consists of a table describing the samples and their properties (termed "Sampling events") and a table describing the isolated strains (termed "Occurrences"). The dataset is publicly available through the GBIF portal.

M Legendre,  J. Bartoli,  L. Shmakova … (2014)
The largest known DNA viruses infect Acanthamoeba and belong to two markedly different families. The Megaviridae exhibit pseudo-icosahedral virions up to 0.7 μm in diameter and adenine-thymine (AT)-rich genomes of up to 1.25 Mb encoding a thousand proteins. Like their Mimivirus prototype discovered 10 y ago, they entirely replicate within cytoplasmic virion factories. In contrast, the recently discovered Pandoraviruses exhibit larger amphora-shaped virions 1 μm in length and guanine-cytosine-rich genomes up to 2.8 Mb long encoding up to 2,500 proteins. Their replication involves the host nucleus. Whereas the Megaviridae share some general features with the previously described icosahedral large DNA viruses, the Pandoraviruses appear unrelated to them. Here we report the discovery of a third type of giant virus combining an even larger pandoravirus-like particle 1.5 μm in length with a surprisingly smaller 600 kb AT-rich genome, a gene content more similar to Iridoviruses and Marseillevirus, and a fully cytoplasmic replication reminiscent of the Megaviridae. This suggests that pandoravirus-like particles may be associated with a variety of virus families more diverse than previously envisioned. This giant virus, named Pithovirus sibericum, was isolated from a >30,000-y-old radiocarbon-dated sample when we initiated a survey of the virome of Siberian permafrost. The revival of such an ancestral amoeba-infecting virus used as a safe indicator of the possible presence of pathogenic DNA viruses, suggests that the thawing of permafrost either from global warming or industrial exploitation of circumpolar regions might not be exempt from future threats to human or animal health.

Todd Sowers,  Erin P. Price (2004)
Our work was motivated by discoveries of prokaryotic communities that survive with little nutrient in ice and permafrost, with implications for past or present microbial life in Martian permafrost and Europan ice. We compared the temperature dependence of metabolic rates of microbial communities in permafrost, ice, snow, clouds, oceans, lakes, marine and freshwater sediments, and subsurface aquifer sediments. Metabolic rates per cell fall into three groupings: (i) a rate, microg(T), for growth, measured in the laboratory at in situ temperatures with minimal disturbance of the medium; (ii) a rate, microm(T), sufficient for maintenance of functions but for a nutrient level too low for growth; and (iii) a rate, micros(T), for survival of communities imprisoned in deep glacial ice, subsurface sediment, or ocean sediment, in which they can repair macromolecular damage but are probably largely dormant. The three groups have metabolic rates consistent with a single activation energy of approximately 110 kJ and that scale as microg(T):microm(T):micros(T) approximately 10(6):10(3):1. There is no evidence of a minimum temperature for metabolism. The rate at -40 degrees C in ice corresponds to approximately 10 turnovers of cellular carbon per billion years. Microbes in ice and permafrost have metabolic rates similar to those in water, soil, and sediment at the same temperature. This finding supports the view that, far below the freezing point, liquid water inside ice and permafrost is available for metabolism. The rate micros(T) for repairing molecular damage by means of DNA-repair enzymes and protein-repair enzymes such as methyltransferase is found to be comparable to the rate of spontaneous molecular damage.

Metabolic activity of permafrost bacteria below the freezing point.

E Rivkina,  E Friedmann,  C P McKay … (2000)
Metabolic activity was measured in the laboratory at temperatures between 5 and -20 degrees C on the basis of incorporation of (14)C-labeled acetate into lipids by samples of a natural population of bacteria from Siberian permafrost (permanently frozen soil). Incorporation followed a sigmoidal pattern similar to growth curves. At all temperatures, the log phase was followed, within 200 to 350 days, by a stationary phase, which was monitored until the 550th day of activity. The minimum doubling times ranged from 1 day (5 degrees C) to 20 days (-10 degrees C) to ca. 160 days (-20 degrees C). The curves reached the stationary phase at different levels, depending on the incubation temperature. We suggest that the stationary phase, which is generally considered to be reached when the availability of nutrients becomes limiting, was brought on under our conditions by the formation of diffusion barriers in the thin layers of unfrozen water known to be present in permafrost soils, the thickness of which depends on temperature.