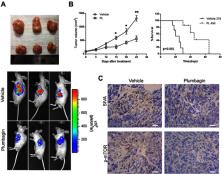 Methods: The antiproliferative activity of plumbagin was evaluated through CCK-8, EdU, and colony forming test. The cell cycle and apoptosis were then analyzed by flow cytometer. Western blot was used to detect the expression of apoptosis related protein, SIVA, and mTOR pathway. RNA-seq was performed to determine the gene expression profiles and overexpressed or knocked down SIVA to validate its role in plumbagin’s antitumor activity. Regarding animal experiment, a xenograft model in BALB/c nude mice was built using LM3-Luci cells. Then bioluminescence imaging and further immunohistochemistry were performed to study the antitumor activity and the expression of SIVA and mTOR in the plumbagin-treated group.

Results: Plumbagin can inhibit proliferation and induce apoptosis of liver cancer cells in vitro. Further experiment demonstrated that plumbagin could inhibit the expression of SIVA and subsequently downregulate the mTOR signaling pathway, and upregulating the expression of SIVA will alleviate the antitumor activity of plumbagin on liver cancer, which confirmed the important role of the SIVA/mTOR signaling pathway in the antitumor activity of plumbagin. In vivo bioluminescence imaging showed a decreased signal in the plumbagin-treated group, and further immunohistochemistry demonstrated that plumbagin could inhibit the SIVA/mTOR signaling pathway in tumor tissues.

Conclusion: Our promising results showed that plumbagin could inhibit proliferation and induce apoptosis of hepatic cancer through inhibiting the SIVA/mTOR signaling pathway for the first time, which indicated that plumbagin might be a good candidate against liver cancer.

RAFT1: a mammalian protein that binds to FKBP12 in a rapamycin-dependent fashion and is homologous to yeast TORs.

David Sabatini,  Hediye Erdjument-Bromage,  Mary Lui … (1994)
The immunosuppressants rapamycin and FK506 bind to the same intracellular protein, the immunophilin FKBP12. The FKB12-FK506 complex interacts with and inhibits the Ca(2+)-activated protein phosphatase calcineurin. The target of the FKBP12-rapamycin complex has not yet been identified. We report that a protein complex containing 245 kDa and 35 kDa components, designated rapamycin and FKBP12 targets 1 and 2 (RAFT1 and RAFT2), interacts with FKBP12 in a rapamycin-dependent manner. Sequences (330 amino acids total) of tryptic peptides derived from the 245 kDa RAFT1 reveal striking homologies to the yeast TOR gene products, which were originally identified by mutations that confer rapamycin resistance in yeast. A RAFT1 cDNA was obtained and found to encode a 289 kDa protein (2549 amino acids) that is 43% and 39% identical to TOR2 and TOR1, respectively. We propose that RAFT1 is the direct target of FKBP12-rapamycin and a mammalian homolog of the TOR proteins.

Helena Pópulo,  José Manuel Lopes,  Paula Soares (2012)
The conserved serine/threonine kinase mTOR (the mammalian target of rapamycin), a downstream effector of the PI3K/AKT pathway, forms two distinct multiprotein complexes: mTORC1 and mTORC2. mTORC1 is sensitive to rapamycin, activates S6K1 and 4EBP1, which are involved in mRNA translation. It is activated by diverse stimuli, such as growth factors, nutrients, energy and stress signals, and essential signalling pathways, such as PI3K, MAPK and AMPK, in order to control cell growth, proliferation and survival. mTORC2 is considered resistant to rapamycin and is generally insensitive to nutrients and energy signals. It activates PKC-α and AKT and regulates the actin cytoskeleton. Deregulation of multiple elements of the mTOR pathway (PI3K amplification/mutation, PTEN loss of function, AKT overexpression, and S6K1, 4EBP1 and eIF4E overexpression) has been reported in many types of cancers, particularly in melanoma, where alterations in major components of the mTOR pathway were reported to have significant effects on tumour progression. Therefore, mTOR is an appealing therapeutic target and mTOR inhibitors, including the rapamycin analogues deforolimus, everolimus and temsirolimus, are submitted to clinical trials for treating multiple cancers, alone or in combination with inhibitors of other pathways. Importantly, temsirolimus and everolimus were recently approved by the FDA for the treatment of renal cell carcinoma, PNET and giant cell astrocytoma. Small molecules that inhibit mTOR kinase activity and dual PI3K-mTOR inhibitors are also being developed. In this review, we aim to survey relevant research, the molecular mechanisms of signalling, including upstream activation and downstream effectors, and the role of mTOR in cancer, mainly in melanoma.

Targets for cell cycle arrest by the immunosuppressant rapamycin in yeast.

Amanda Hall,  N. Movva,  Joseph Heitman (1991)
FK506 and rapamycin are related immunosuppressive compounds that block helper T cell activation by interfering with signal transduction. In vitro, both drugs bind and inhibit the FK506-binding protein (FKBP) proline rotamase. Saccharomyces cerevisiae cells treated with rapamycin irreversibly arrested in the G1 phase of the cell cycle. An FKBP-rapamycin complex is concluded to be the toxic agent because (i) strains that lack FKBP proline rotamase, encoded by FPR1, were viable and fully resistant to rapamycin and (ii) FK506 antagonized rapamycin toxicity in vivo. Mutations that conferred rapamycin resistance altered conserved residues in FKBP that are critical for drug binding. Two genes other than FPR1, named TOR1 and TOR2, that participate in rapamycin toxicity were identified. Nonallelic noncomplementation between FPR1, TOR1, and TOR2 alleles suggests that the products of these genes may interact as subunits of a protein complex. Such a complex may mediate nuclear entry of signals required for progression through the cell cycle.