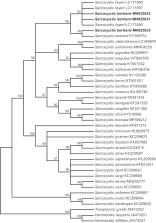 Three cyst-forming Sarcocystis species have been identified in horsemeat; however, there exists considerable confusion concerning their relationships. Here, 74% (34/46) of the examined tissue samples from horses contained sarcocysts based on examination by light microscopy (LM), and the organism was identified as Sarcocystis bertrami based on cyst structure. The S. bertrami cysts were microscopic (up to 6750 μm in length) and exhibited a striated wall with 2.0–5.1 μm villar protrusions (vps) under LM. Transmission electron microscopy (TEM) observations showed that the vps were tightly packed, similar to “type 11c”. Four genetic markers (18S, 28S, ITS1 and the mitochondrial cox1 gene) of S. bertrami were sequenced and analyzed. The 28S and ITS1 sequences are the first records for Sarcocystis in horses. The newly obtained sequences of the 18S and cox1 genes both shared the highest similarities with those of S. bertrami and S. fayeri obtained from horses. Phylogenetic analysis based on the 18S, 28S and cox1 sequences revealed that S. bertrami and S. fayeri formed an independent clade within a group comprising Sarcocystis spp. from ruminants and pigs. Therefore, S. bertrami and S. fayeri are considered to represent the same species of Sarcocystis in horses, and S. fayeri is a junior synonym of Sarcocystis bertrami.

Bjørn Gjerde (2014)
In a previous investigation, five Sarcocystis species were described from Norwegian red deer and believed to be conspecific with species occurring in either reindeer or moose based on sarcocyst morphology and nucleotide sequences of the nuclear ribosomal DNA unit. The aim of the present study was to characterize numerous isolates of these sarcocyst types at the mitochondrial cytochrome c oxidase subunit I gene (cox1) in order to corroborate or refute previous species designations of Sarcocystis in red deer. The Sarcocystis tarandi- and Sarcocystis rangiferi-like taxa in red deer and reindeer, respectively, were thoroughly compared by sequencing 14-27 isolates of each type. Sequence comparisons revealed four distinct sequence types, which by phylogenetic analyses were placed in four monophyletic groups according to host origin, and they were therefore considered to represent four separate species. The two taxa of this type in red deer were named Sarcocystis elongata and Sarcocystis truncata, respectively. Sequencing of many isolates of Sarcocystis hjorti and Sarcocystis ovalis from red deer and moose confirmed that these species occur in both hosts. A revised description of the two new species is given and the current knowledge concerning all six Sarcocystis species in red deer is reviewed.

Thomas M Suter,  Jitender Dubey,  David Granstrom … (1991)
Sarcocystis neuronan n. sp. is proposed for the apicomplexan taxon associated with myeloencephalitis in horses. Only asexual stages of this parasite presently are known, and they are found within neuronal cells and leukocytes of the brain and spinal cord. The parasite is located in the host cell cytoplasm, does not have a parasitophorous vacuole, and divides by endopolygeny. Schizonts are 5-35 microns x 5-20 microns and contain 4-40 merozoites arranged in a rosette around a prominent residual body. Merozoites are approximately 4 x 1 micron, have a central nucleus, and lack rhoptries. Schizonts and merozoites react with Sarcocystis cruzi antiserum but not with Caryospora bigenetica. Toxoplasma gondii, Hammondia hammondi, or Neospora caninum antisera in an immunohistochemical test.

Molecular characterisation of Sarcocystis rileyi from a common eider (Somateria mollissima) in Norway.

Bjørn Gjerde (2014)
The breast and leg muscles of a common eider (Somateria mollissima; Anatidae: Anseriformes) from northern Norway contained numerous grossly visible cigar-shaped sarcocysts measuring about 5 × 1 mm. Light microscopic examination of isolated sarcocysts revealed that they were encapsulated by a thin fibrous layer, underneath which there was a thin and fairly smooth cyst wall with no visible protrusions. The cystozoites were straight, spindle-shaped and about 13 μm long. Genomic DNA was extracted from 12 excised sarcocysts and each DNA isolate was subjected to PCR amplification of one to four loci: the 18S and 28S ribosomal RNA genes (four isolates), the internal transcribed spacer 1 (ITS1) region (six isolates) and the mitochondrial cytochrome c oxidase subunit 1 gene (cox1) (12 isolates). At the three nuclear loci, the new sequences showed 99.9-100% sequence identity with previous sequences of Sarcocystis rileyi from the mallard duck in Lithuania and USA, and they could therefore be assigned to this species. At cox1, the new sequences of S. rileyi were most similar to Sarcocystis arctica and Sarcocystis neurona, but the most closely related Sarcocystis spp. in birds have not been sequenced at this locus. There was no sequence variation at any locus between the 4-12 examined isolates of S. rileyi. This is the first genetically verified record of S. rileyi in the common eider, as well as in any bird species in Norway. The phylogenetic placement of S. rileyi was inferred separately from 28S rRNA gene and cox1 sequences, and similar results were obtained in both analyses.