Cost-Effectiveness Analysis of Ezetimibe as the Add-on Treatment to Moderate-Dose Rosuvastatin versus High-Dose Rosuvastatin in the Secondary Prevention of Cardiovascular Diseases in China: A Markov Model Analysis 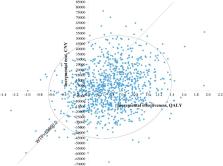 For patients with inadequate control of cholesterol using moderate-dose statins in the secondary prevention of cardiovascular diseases (CVD), either doubling the dose of statins or adding ezetimibe should be considered. The cost-effectiveness of them is unknown in the Chinese context. The aim of this study is to compare the cost and effectiveness of the two regimens, and estimate the incremental cost-effectiveness ratio (ICER).

A Markov model of five health statuses were used to estimate long-term costs and quality-adjusted life-years (QALYs) of the two treatment regimens from the healthcare perspective. The effectiveness data used to calculate the transition probability was based on a previously published randomized trial. The utility data was gathered from literature and the costs were gathered from the electronic medical record system of West China Hospital in Chinese Yuan (CNY) in 2017 price. One-way sensitivity analysis and probabilistic sensitivity analysis were conducted.

Richard Haynes,  Lixin Jiang,  Jemma C. Hopewell … (2013)
Aims Niacin has potentially favourable effects on lipids, but its effect on cardiovascular outcomes is uncertain. HPS2-THRIVE is a large randomized trial assessing the effects of extended release (ER) niacin in patients at high risk of vascular events. Methods and results Prior to randomization, 42 424 patients with occlusive arterial disease were given simvastatin 40 mg plus, if required, ezetimibe 10 mg daily to standardize their low-density lipoprotein (LDL)-lowering therapy. The ability to remain compliant with ER niacin 2 g plus laropiprant 40 mg daily (ERN/LRPT) for ∼1 month was then assessed in 38 369 patients and about one-third were excluded (mainly due to niacin side effects). A total of 25 673 patients were randomized between ERN/LRPT daily vs. placebo and were followed for a median of 3.9 years. By the end of the study, 25% of participants allocated ERN/LRPT vs. 17% allocated placebo had stopped their study treatment. The most common medical reasons for stopping ERN/LRPT were related to skin, gastrointestinal, diabetes, and musculoskeletal side effects. When added to statin-based LDL-lowering therapy, allocation to ERN/LRPT increased the risk of definite myopathy [75 (0.16%/year) vs. 17 (0.04%/year): risk ratio 4.4; 95% CI 2.6–7.5; P 3× upper limit of normal, in the absence of muscle damage, was seen in 48 (0.10%/year) ERN/LRPT vs. 30 (0.06%/year) placebo allocated participants. Conclusion The risk of myopathy was increased by adding ERN/LRPT to simvastatin 40 mg daily (with or without ezetimibe), particularly in Chinese patients whose myopathy rates on simvastatin were higher. Despite the side effects of ERN/LRPT, among individuals who were able to tolerate it for ∼1 month, three-quarters continued to take it for ∼4 years.

Explaining the increase in coronary heart disease mortality in Beijing between 1984 and 1999.

Jing Liu,  Simon Capewell,  Julia A Critchley … (2004)
Coronary heart disease (CHD) mortality is rising in many developing countries. We examined how much of the increase in CHD mortality in Beijing, China, between 1984 and 1999 could be attributed to changes in major cardiovascular risk factors and assessed the impact of medical and surgical treatments. A validated, cell-based mortality model synthesized data on (1) patient numbers, (2) uptake of specific medical and surgical treatments, (3) treatment effectiveness, and (4) population trends in major cardiovascular risk factors (smoking, total cholesterol, blood pressure, obesity, and diabetes). Main data sources were the WHO MONICA and Sino-MONICA studies, the Chinese Multi-provincial Cohort Study, routine hospital statistics, and published meta-analyses. Age-adjusted CHD mortality rates increased by approximately 50% in men and 27% in women (1608 more deaths in 1999 than expected by application of 1984 rates). Most of this increase ( approximately 77%, or 1397 additional deaths) was attributable to substantial rises in total cholesterol levels (more than 1 mmol/L), plus increases in diabetes and obesity. Blood pressure decreased slightly, whereas smoking prevalence increased in men but decreased substantially in women. In 1999, medical and surgical treatments in patients together prevented or postponed approximately 642 deaths, mainly from initial treatments for acute myocardial infarction ( approximately 41%), hypertension (24%), angina (15%), secondary prevention (11%), and heart failure (10%). Multiway sensitivity analyses did not greatly influence the results. Much of the dramatic CHD mortality increases in Beijing can be explained by rises in total cholesterol, reflecting an increasingly "Western" diet. Without cardiological treatments, increases would have been even greater.

AMERICAN ASSOCIATION OF CLINICAL ENDOCRINOLOGISTS AND AMERICAN COLLEGE OF ENDOCRINOLOGY GUIDELINES FOR MANAGEMENT OF DYSLIPIDEMIA AND PREVENTION OF CARDIOVASCULAR DISEASE - EXECUTIVE SUMMARYComplete Appendix to Guidelines available at http://journals.aace.com.

Paul S. Jellinger,  Yehuda Handelsman,  Paul Rosenblit … (2017)
The development of these guidelines is mandated by the American Association of Clinical Endocrinologists (AACE) Board of Directors and American College of Endocrinology (ACE) Board of Trustees and adheres with published AACE protocols for the standardized production of clinical practice guidelines (CPGs).