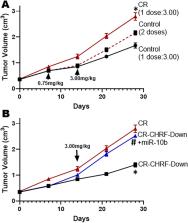 Ovarian Cancer (OC) is a highly lethal gynecological cancer which often progresses through acquired resistance against the administered therapy. Cisplatin is a common therapeutic for the treatment of OC patients and therefore it is critical to understand the mechanisms of resistance against this drug. We studied a paired cell line consisting of parental and cisplatin resistant (CR) derivative ES2 OC cells, and found a number of dysregulated lncRNAs, with CHRF being the most significantly upregulated lncRNA in CR ES2 cells. The findings corroborated in human patient samples and CHRF was significantly elevated in OC patients with resistant disease. CHRF was also found to be elevated in patients with liver metastasis. miR-10b was found to be mechanistically involved in CHRF mediated cisplatin resistance. It induced resistance in not only ES2 but also OVCAR and SKOV3 OC cells. Induction of epithelial-to-mesenchymal-transition (EMT) and activation of STAT3 signaling were determined to be the mechanisms underlying the CHRF-miR-10b axis-mediated cisplatin resistance. Down-regulation of CHRF reversed EMT, STAT3 activation and the resulting cisplatin resistance, which could be attenuated by miR-10b. The results were also validated in an in vivo cisplatin resistance model wherein CR cells were associated with increased tumor burden, CHRF downregulation associated with decreased tumor burden and miR-10b again attenuated the CHRF downregulation effects. Our results support a novel role of lncRNA CHRF in cisplatin resistance of OC and establish CHRF-miR-10b signaling as a putative therapeutic target for sensitizing resistant OC cells.

Epidemiology of gynecologic cancers in China

Xiyi Jiang,  Huijuan Tang,  Tianhui Chen (2017)
Cancer has become a major disease burden across the globe. It was estimated that 4.29 million new incident cases and 2.81 million death cases of cancer would occur in 2015 in China, with the age-standardized incidence rate (ASIR) of 201.1 per 100,000 and age-standardized mortality rate (ASMR) of 126.9 per 100,000, respectively. For females, 2 of the top 10 most common types of cancer would be gynecologic cancers, with breast cancer being the most prevalent (268.6 thousand new incident cases) and cervical cancer being the 7th most common cancer (98.9 thousand new incident cases). The incidence and mortality of gynecologic cancers have been constantly increasing in China over last 2 decades, which become a major health concern for women. Survival rates of gynecologic cancers are generally not satisfactory and decrease along with advancing stage, though national data on survival are still not available. It is of great importance to overview on the epidemiology of gynecologic cancers, which may provide scientific clues for strategy-making of prevention and control, and eventually lowering the incidence and mortality rate as well as improving the survival rate in the future.