The use of amisulpride in the treatment of acute psychosis 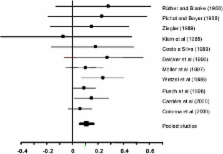 The management of acute episodes in schizophrenia is frequently initiated in the psychiatric emergency department and requires rapid intervention to relieve distress and psychiatric symptoms. Both non-pharmacological and pharmacological interventions are needed to calm the patient and prevent potential harm to the patient or others. Treatment is a step-by-step process including management of behavioral symptomatology, diagnosis of potential organic causes, and evaluation of potential substance abuse. Better care is delivered if predefined standard operating procedures are adopted systematically. The ultimate goal of treatment is to establish a therapeutic alliance with the patient. Atypical antipsychotics given orally are recommended as a first-line treatment. As the treatment endpoint is calmness rather than sleep, a non-sedative antipsychotic agent is usually preferred. Drug tolerance is a major issue for the patient. Amisulpride is an effective atypical antipsychotic agent in this context. The optimal dose is 800 mg/day, which is effective on positive and negative symptoms and can be given from the first day with a low risk of extrapyramidal symptoms. Since drug–drug interactions are limited, agitation and anxiety may be controlled by short-term adjunctive therapy with benzodiazepines. In conclusion, amisulpride is an appropriate first-line treatment for the management of acute psychosis.

A rating scale for extrapyramidal side effects.

A meta-analysis of the efficacy of second-generation antipsychotics.

I Glick,  Nancy Chen,  S. Davis (2003)
Consensus panel recommendations regarding choice of an antipsychotic agent for schizophrenia differ markedly, but most consider second-generation antipsychotics (SGAs) as a homogeneous group. It has been suggested that SGAs seem falsely more efficacious than first-generation antipsychotics (FGAs) as a result of reduced efficacy due to use of a high-dose comparator, haloperidol. We performed (1) a meta-analysis of randomized efficacy trials comparing SGAs and FGAs, (2) comparisons between SGAs, (3) a dose-response analysis of FGAs and SGAs, and (4) an analysis of the effect on efficacy of an overly high dose of an FGA comparator. Literature search of clinical trials between January 1953 and May 2002 of patients with schizophrenia from electronic databases, reference lists, posters, the Food and Drug Administration, and other unpublished data. We included 124 randomized controlled trials with efficacy data on 10 SGAs vs FGAs and 18 studies of comparisons between SGAs. Two of us independently extracted the sample sizes, means, and standard deviation of the efficacy data. Using the Hedges-Olkin algorithm, the effect sizes of clozapine, amisulpride, risperidone, and olanzapine were 0.49, 0.29, 0.25, and 0.21 greater than those of FGAs, with P values of 2 x 10-8, 3 x 10-7, 2 x 10-12, and 3 x 10-9, respectively. The remaining 6 SGAs were not significantly different from FGAs, although zotepine was marginally different. No efficacy difference was detected among amisulpride, risperidone, and olanzapine. We found no evidence that the haloperidol dose (or all FGA comparators converted to haloperidol-equivalent doses) affected these results when we examined its effect by drug or in a 2-way analysis of variance model in which SGA effectiveness is entered as a second factor. Some SGAs are more efficacious than FGAs, and, therefore, SGAs are not a homogeneous group.

Efficacy and extrapyramidal side-effects of the new antipsychotics olanzapine, quetiapine, risperidone, and sertindole compared to conventional antipsychotics and placebo. A meta-analysis of randomized controlled trials.