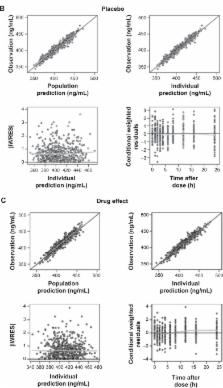 A single 400 mg dose of moxifloxacin has been the standard positive control for thorough QT (TQT) studies. However, it is not clearly known whether a 400 mg dose is also applicable to TQT studies in Asian subjects, including Koreans. Thus, we aimed to develop a pharmacokinetic (PK)-pharmacodynamic (PD) model for moxifloxacin, to evaluate the time course of its effect on QT intervals in Koreans. Data from three TQT studies of 33 healthy male Korean subjects who received 400 and 800 mg of moxifloxacin and placebo (water) were used. Twelve-lead electrocardiograms were taken for 2 consecutive days: 1 day to record diurnal changes and the next day to record moxifloxacin or placebo effects. Peripheral blood samples were also obtained for PK analysis. The PK-PD data obtained were analyzed using a nonlinear mixed-effects method (NONMEM ver. 7.2). A two-compartment linear model with first-order absorption provided the best description of moxifloxacin PK. Individualized QT interval correction, by heart rate, was performed by a power model, and the circadian variation of QT intervals was described by two mixed-effect cosine functions. The effect of moxifloxacin on QT interval prolongation was well explained by the nonlinear dose-response (E max) model, and the effect by 800 mg was only slightly greater than that of 400 mg. Although Koreans appeared to be more sensitive to moxifloxacin-induced QT prolongation than were Caucasians, the PK-PD model developed suggests that a 400 mg dose of moxifloxacin is also applicable to QT studies in Korean subjects.

J. Florián,  Ameeta Parekh,  Richard C Brundage … (2011)
To increase our understanding of important subject characteristics and design variables affecting the performance of oral moxifloxacin in thorough QT studies, population pharmacokinetic and concentration-QTc models were developed by pooling data from 20 studies. A 1-compartment model with first-order elimination described the pharmacokinetics. Absorption delay was modeled using 8 transit compartments. Mean (95% confidence interval) values for oral clearance, apparent volume of distribution, the first-order absorption rate constant, and mean transit time were 11.7 (11.5-11.9) L/h, 147 (144-150) L, 1.9 (1.7-2.1) 1/h, and 0.3 (0.28-0.34) hours, respectively. Overencapsulating the moxifloxacin tablet increased mean transit time by 138% and delayed time to maximum concentration by 0.5 hours but had a minimal effect on overall exposure. Administration with food decreased absorption rate constant by 27%. Women had higher moxifloxacin exposure compared with men, which was explained by lower body weights. A linear model described the concentration-QTc relationship with a mean slope of 3.1 (2.8-3.3) milliseconds per µg/mL moxifloxacin. Mean slopes for individual studies ranged from 1.6 to 4.8 milliseconds per µg/mL. Hysteresis between moxifloxacin plasma concentrations and QTc was modest, and incorporating this delay did not result in a different slope (3.3 milliseconds per µg/mL). There were no differences in slope estimates between men and women or among race categories.

Charles Antzelevitch,  R. J. Lipicky,  Dan Roden … (2004)
Torsades de pointes is a potentially lethal arrhythmia that occasionally appears as an adverse effect of pharmacotherapy. Recently developed understanding of the underlying electrophysiology allows better estimation of the drug-induced risks and explains the failures of older approaches through the surface ECG. This article expresses a consensus reached by an independent academic task force on the physiologic understanding of drug-induced repolarization changes, their preclinical and clinical evaluation, and the risk-to-benefit interpretation of drug-induced torsades de pointes. The consensus of the task force includes suggestions on how to evaluate the risk of torsades within drug development programs. Individual sections of the text discuss the techniques and limitations of methods directed at drug-related ion channel phenomena, investigations aimed at action potentials changes, preclinical studies of phenomena seen only in the whole (or nearly whole) heart, and interpretation of human ECGs obtained in clinical studies. The final section of the text discusses drug-induced torsades within the larger evaluation of drug-related risks and benefits.

Pharmacokinetic-pharmacodynamic modeling in the data analysis and interpretation of drug-induced QT/QTc prolongation.

V K Piotrovsky (2004)
In this review, factors affecting the QT interval and the methods that are currently in use in the analysis of drug effects on the QT interval duration are overviewed with the emphasis on (population) pharmacokinetic-pharmacodynamic (PK-PD) modeling. Among which the heart rate (HR) and the circadian rhythm are most important since they may interfere with the drug effect and need to be taken into account in the data analysis. The HR effect or the RR interval (the distance between 2 consecutive R peaks) effect is commonly eliminated before any further analysis, and many formulae have been suggested to correct QT intervals for changes in RR intervals. The most often used are Bazett and Fridericia formulae introduced in 1920. They are both based on the power function and differ in the exponent parameter. However, both assume the same exponent for different individuals. More recent findings do not confirm this assumption, and individualized correction is necessary to avoid under- or overcorrection that may lead to artificial observations of drug-induced QT interval prolongation. Despite the fact that circadian rhythm in QT and QTc intervals is a well-documented phenomenon, it is usually overlooked when drug effects are evaluated. This may result in a false-positive outcome of the analysis as the QTc peak due to the circadian rhythm may coincide with the peak of the drug plasma concentration. In view of these effects interfering with a potential drug effect on the QTc interval and having in mind low precision of QT interval measurements, a preferable way to evaluate the drug effect is to apply a population PK-PD modeling. In the literature, however, there are only a few publications in which population PK-PD modeling is applied to QT interval prolongation data, and they all refer to antiarrhythmic agents. In this review, after the most important sources of variability are outlined, a comprehensive population PK-PD model is presented that incorporates an individualized QT interval correction, a circadian rhythm in the individually corrected QT intervals, and a drug effect. The model application is illustrated using real data obtained with 2 compounds differing in their QT interval prolongation potential. The usefulness of combining data of several studies is stressed. Finally, the standard approach based on the raw observations and formal statistics, as described in the Preliminary Concept paper of the International Conference on Harmonization, is briefly compared with the method based on population PK-PD modeling, and the advantages of the latter are outlined.