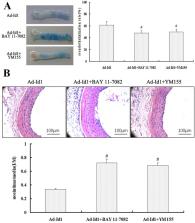 This study aims to investigate the relationship between Id1 and NFκB/survivin signaling pathways and their role in injured vascular repair by establishing a rat carotid balloon injury model.

Gourisankar Ghosh,  A. Fusco,  Bin Huang … (2012)
The signaling module that specifies nuclear factor-κΒ (NF-κB) activation is a three-component system: NF-κB, inhibitor of NF-κΒ (IκΒ), and IκΒ kinase complex (IKK). IKK receives upstream signals from the surface or inside the cell and converts itself into a catalytically active form, leading to the destruction of IκB in the inhibited IκB:NF-κB complex, leaving active NF-κB free to regulate target genes. Hidden within this simple module are family members that all can undergo various modifications resulting in expansion of functional spectrum. Three-dimensional structures representing all three components are now available. These structures have allowed us to interpret cellular observations in molecular terms and at the same time helped us to bring forward new concepts focused towards understanding the specificity in the NF-κB activation pathway. © 2012 John Wiley & Sons A/S.