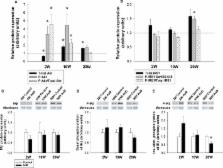 Rats underwent aortic banding to induce pressure overload. At 10 weeks, rats showed cardiac hypertrophy and pulmonary congestion, but left ventricular dilatation and systolic dysfunction were only evident after 20 weeks. This contractile impairment was accompanied by mitochondrial dysfunction as shown by markedly reduced state 3 respiration of isolated mitochondria. Aortic banding did not affect systemic insulin response. However, insulin‐stimulated cardiac glucose uptake and glucose oxidation were significantly diminished at 10 and 20 weeks, which indicates cardiac insulin resistance starting before the onset of mitochondrial and contractile dysfunction. The impaired cardiac insulin action was related to a decrease in insulin‐stimulated phosphorylation of insulin receptor β. Consistently, we found elevated activity of protein tyrosine phosphatase 1B ( PTP1B) at 10 and 20 weeks, which may blunt insulin action by dephosphorylating insulin receptor β. PTP1B activity was also significantly increased in left ventricular samples of patients with systolic dysfunction undergoing aortic valve replacement because of aortic stenosis.

Pressure overload causes cardiac insulin resistance that precedes and accompanies mitochondrial and systolic dysfunction. Activation of PTP1B in the heart is associated with heart failure in both rats and humans and may account for cardiac insulin resistance. PTP1B may be a potential target to modulate insulin sensitivity and contractile function in the failing heart.

The war against heart failure: the Lancet lecture.

Eugene Braunwald (2015)
Heart failure is a global problem with an estimated prevalence of 38 million patients worldwide, a number that is increasing with the ageing of the population. It is the most common diagnosis in patients aged 65 years or older admitted to hospital and in high-income nations. Despite some progress, the prognosis of heart failure is worse than that of most cancers. Because of the seriousness of the condition, a declaration of war on five fronts has been proposed for heart failure. Efforts are underway to treat heart failure by enhancing myofilament sensitivity to Ca(2+); transfer of the gene for SERCA2a, the protein that pumps calcium into the sarcoplasmic reticulum of the cardiomyocyte, seems promising in a phase 2 trial. Several other abnormal calcium-handling proteins in the failing heart are candidates for gene therapy; many short, non-coding RNAs--ie, microRNAs (miRNAs)--block gene expression and protein translation. These molecules are crucial to calcium cycling and ventricular hypertrophy. The actions of miRNAs can be blocked by a new class of drugs, antagomirs, some of which have been shown to improve cardiac function in animal models of heart failure; cell therapy, with autologous bone marrow derived mononuclear cells, or autogenous mesenchymal cells, which can be administered as cryopreserved off the shelf products, seem to be promising in both preclinical and early clinical heart failure trials; and long-term ventricular assistance devices are now used increasingly as a destination therapy in patients with advanced heart failure. In selected patients, left ventricular assistance can lead to myocardial recovery and explantation of the device. The approaches to the treatment of heart failure described, when used alone or in combination, could become important weapons in the war against heart failure.

Yannick Le Manach,  Y Roques,  Hubert Vidal … (2003)
To understand better the defects in the proximal steps of insulin signaling during type 2 diabetes, we used differentiated human skeletal muscle cells in primary culture. When compared with cells from control subjects, myotubes established from patients with type 2 diabetes presented the same defects as those previously evidenced in vivo in muscle biopsies, including defective stimulation of phosphatidylinositol (PI) 3-kinase activity, decreased association of PI 3-kinase with insulin receptor substrate (IRS)-1 and reduced IRS-1 tyrosine phosphorylation during insulin stimulation. In contrast to IRS-1, the signaling through IRS-2 was not altered. Investigating the causes of the reduced tyrosine phosphorylation of IRS-1, we found a more than twofold increase in the basal phosphorylation of IRS-1 on serine 636 in myotubes from patients with diabetes. Concomitantly, there was a higher basal mitogen-activated protein kinase (MAPK) activity in these cells, and inhibition of the MAPKs with PD98059 strongly reduced the level of serine 636 phosphorylation. These results suggest that IRS-1 phosphorylation on serine 636 might be involved in the reduced phosphorylation of IRS-1 on tyrosine and in the subsequent alteration of insulin-induced PI 3-kinase activation. Moreover, increased MAPK activity seems to play a role in the phosphorylation of IRS-1 on serine residue in human muscle cells.

Dr Nguyen and Dr Schwarzer contributed equally to this work.