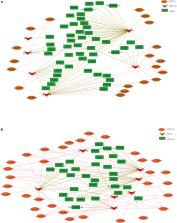 Yuan Gao,  Jinfeng Wang,  Fangqing Zhao (2015)
Recent studies reveal that circular RNAs (circRNAs) are a novel class of abundant, stable and ubiquitous noncoding RNA molecules in animals. Comprehensive detection of circRNAs from high-throughput transcriptome data is an initial and crucial step to study their biogenesis and function. Here, we present a novel chiastic clipping signal-based algorithm, CIRI, to unbiasedly and accurately detect circRNAs from transcriptome data by employing multiple filtration strategies. By applying CIRI to ENCODE RNA-seq data, we for the first time identify and experimentally validate the prevalence of intronic/intergenic circRNAs as well as fragments specific to them in the human transcriptome. Electronic supplementary material The online version of this article (doi:10.1186/s13059-014-0571-3) contains supplementary material, which is available to authorized users.

Hak Kyun Kim,  Yong Lee,  Umasundari Sivaprasad … (2006)
Three muscle-specific microRNAs, miR-206, -1, and -133, are induced during differentiation of C2C12 myoblasts in vitro. Transfection of miR-206 promotes differentiation despite the presence of serum, whereas inhibition of the microRNA by antisense oligonucleotide inhibits cell cycle withdrawal and differentiation, which are normally induced by serum deprivation. Among the many mRNAs that are down-regulated by miR-206, the p180 subunit of DNA polymerase α and three other genes are shown to be direct targets. Down-regulation of the polymerase inhibits DNA synthesis, an important component of the differentiation program. The direct targets are decreased by mRNA cleavage that is dependent on predicted microRNA target sites. Unlike small interfering RNA–directed cleavage, however, the 5′ ends of the cleavage fragments are distributed and not confined to the target sites, suggesting involvement of exonucleases in the degradation process. In addition, inhibitors of myogenic transcription factors, Id1-3 and MyoR, are decreased upon miR-206 introduction, suggesting the presence of additional mechanisms by which microRNAs enforce the differentiation program.

This article was submitted to Epigenomics and Epigenetics, a section of the journal Frontiers in Cell and Developmental Biology