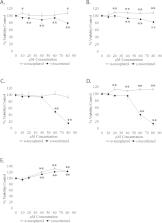 α-tocopherol (AT) and γ-tocotrienol (GT3) are vitamin E isoforms considered to have potential chemopreventive properties. AT has been widely studied in vitro and in clinical trials with mixed results. The latest clinical study (SELECT trial) tested AT in prostate cancer patients, determined that AT provided no benefit, and could promote cancer. Conversely, GT3 has shown antineoplastic properties in several in vitro studies, with no clinical studies published to date. GT3 causes apoptosis via upregulation of the JNK pathway; however, inhibition results in a partial block of cell death. We compared side by side the mechanistic differences in these cells in response to AT and GT3.

The effects of GT3 and AT were studied on androgen sensitive LNCaP and androgen independent PC-3 prostate cancer cells. Their cytotoxic effects were analyzed via MTT and confirmed by metabolic assays measuring ATP. Cellular pathways were studied by immunoblot. Quantitative analysis and the determination of relationships between cell signaling events were analyzed for both agents tested. Non-cancerous prostate RWPE-1 cells were also included as a control.

The RAF/RAS/ERK pathway was significantly activated by GT3 in LNCaP and PC-3 cells but not by AT. This activation is essential for the apoptotic affect by GT3 as demonstrated the complete inhibition of apoptosis by MEK1 inhibitor U0126. Phospho-c-JUN was upregulated by GT3 but not AT. No changes were observed on AKT for either agent, and no release of cytochrome c into the cytoplasm was detected. Caspases 9 and 3 were efficiently activated by GT3 on both cell lines irrespective of androgen sensitivity, but not in cells dosed with AT. Cell viability of non-cancerous RWPE-1 cells was affected neither by GT3 nor AT.

c-JUN is a recognized master regulator of apoptosis as shown previously in prostate cancer. However, the mechanism of action of GT3 in these cells also include a significant activation of ERK which is essential for the apoptotic effect of GT3. The activation of both, ERK and c-JUN, is required for apoptosis and may suggest a relevant step in ensuring circumvention of mechanisms of resistance related to the constitutive activation of MEK1.

Elizabeth Yang,  Jiping Zha,  Jennifer Jockel … (1995)
To extend the mammalian cell death pathway, we screened for further Bcl-2 interacting proteins. Both yeast two-hybrid screening and lambda expression cloning identified a novel interacting protein, Bad, whose homology to Bcl-2 is limited to the BH1 and BH2 domains. Bad selectively dimerized with Bcl-xL as well as Bcl-2, but not with Bax, Bcl-xs, Mcl-1, A1, or itself. Bad binds more strongly to Bcl-xL than Bcl-2 in mammalian cells, and it reversed the death repressor activity of Bcl-xL, but not that of Bcl-2. When Bad dimerized with Bcl-xL, Bax was displaced and apoptosis was restored. When approximately half of Bax was heterodimerized, death was inhibited. The susceptibility of a cell to a death signal is determined by these competing dimerizations in which levels of Bad influence the effectiveness of Bcl-2 versus Bcl-xL in repressing death.

Identification of the JNK signaling pathway as a functional target of the tumor suppressor PTEN.