COVID-19 and Italy: what next? 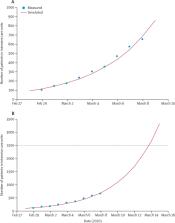 The spread of severe acute respiratory syndrome coronavirus 2 (SARS-CoV-2) has already taken on pandemic proportions, affecting over 100 countries in a matter of weeks. A global response to prepare health systems worldwide is imperative. Although containment measures in China have reduced new cases by more than 90%, this reduction is not the case elsewhere, and Italy has been particularly affected. There is now grave concern regarding the Italian national health system's capacity to effectively respond to the needs of patients who are infected and require intensive care for SARS-CoV-2 pneumonia. The percentage of patients in intensive care reported daily in Italy between March 1 and March 11, 2020, has consistently been between 9% and 11% of patients who are actively infected. The number of patients infected since Feb 21 in Italy closely follows an exponential trend. If this trend continues for 1 more week, there will be 30 000 infected patients. Intensive care units will then be at maximum capacity; up to 4000 hospital beds will be needed by mid-April, 2020. Our analysis might help political leaders and health authorities to allocate enough resources, including personnel, beds, and intensive care facilities, to manage the situation in the next few days and weeks. If the Italian outbreak follows a similar trend as in Hubei province, China, the number of newly infected patients could start to decrease within 3–4 days, departing from the exponential trend. However, this cannot currently be predicted because of differences between social distancing measures and the capacity to quickly build dedicated facilities in China.

Qun Li, Xuhua Guan, Peng Wu … (2020)
Abstract Background The initial cases of novel coronavirus (2019-nCoV)–infected pneumonia (NCIP) occurred in Wuhan, Hubei Province, China, in December 2019 and January 2020. We analyzed data on the first 425 confirmed cases in Wuhan to determine the epidemiologic characteristics of NCIP. Methods We collected information on demographic characteristics, exposure history, and illness timelines of laboratory-confirmed cases of NCIP that had been reported by January 22, 2020. We described characteristics of the cases and estimated the key epidemiologic time-delay distributions. In the early period of exponential growth, we estimated the epidemic doubling time and the basic reproductive number. Results Among the first 425 patients with confirmed NCIP, the median age was 59 years and 56% were male. The majority of cases (55%) with onset before January 1, 2020, were linked to the Huanan Seafood Wholesale Market, as compared with 8.6% of the subsequent cases. The mean incubation period was 5.2 days (95% confidence interval [CI], 4.1 to 7.0), with the 95th percentile of the distribution at 12.5 days. In its early stages, the epidemic doubled in size every 7.4 days. With a mean serial interval of 7.5 days (95% CI, 5.3 to 19), the basic reproductive number was estimated to be 2.2 (95% CI, 1.4 to 3.9). Conclusions On the basis of this information, there is evidence that human-to-human transmission has occurred among close contacts since the middle of December 2019. Considerable efforts to reduce transmission will be required to control outbreaks if similar dynamics apply elsewhere. Measures to prevent or reduce transmission should be implemented in populations at risk. (Funded by the Ministry of Science and Technology of China and others.)

Time to use the p-word? Coronavirus enters dangerous new phase