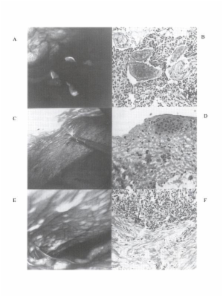 Epithelial ovarian cancer (EOC) is a significant cause of cancer related morbidity and mortality in women. Preferential involvement of peritoneal structures contributes to the overall poor outcome in EOC patients. Advances in biotechnology, such as cDNA microarray, are a product of the Human Genome Project and are beginning to provide fresh opportunities to understand the biology of EOC. In particular, it is now possible to examine in depth, at the molecular level, the complex relationship between the tumor itself and its surrounding microenvironment.

This review focuses on the anatomy, physiology, and current immunobiologic research of peritoneal structures, and addresses certain potentially useful animal models. Changes in both the inflammatory and non-inflammatory cell compartments, as well as alterations to the extracellular matrix, appear to be signal events that contribute to the remodeling effects of the peritoneal stroma and surface epithelial cells on tumor growth and spread. These alterations may involve a number of proteins, including cytokines, chemokines, growth factors, either membrane or non-membrane bound, and integrins. Interactions between these molecules and molecular structures within the extracellular matrix, such as collagens and the proteoglycans, may contribute to a peritoneal mesothelial surface and stromal environment that is conducive to tumor cell proliferation and invasion. These alterations need to be examined and defined as possible prosnosticators and as therapeutic or diagnostic targets.

Annual report to the nation on the status of cancer, 1975-2001, with a special feature regarding survival.

Xiaocheng Wu,  Elizabeth Ward,  H. Howe … (2004)
The American Cancer Society (ACS), the Centers for Disease Control and Prevention (CDC), the National Cancer Institute (NCI), and the North American Association of Central Cancer Registries (NAACCR) collaborate annually to provide updated information regarding cancer occurrence and trends in the U.S. This year's report features a special section on cancer survival. Information concerning cancer cases was obtained from the NCI, CDC, and NAACCR and information concerning recorded cancer deaths was obtained from the CDC. The authors evaluated trends in age-adjusted cancer incidence and death rates by regression models and described and compared survival rates over time and across racial/ethnic populations. Incidence rates for all cancers combined decreased from 1991 through 2001, but stabilized from 1995 through 2001 when adjusted for delay in reporting. The incidence rates for female lung cancer decreased (although not statistically significant for delay adjusted) and mortality leveled off for the first time after increasing for many decades. Colorectal cancer incidence rates also decreased. Death rates decreased for all cancers combined (1.1% per year since 1993) and for many of the top 15 cancers occurring in men and women. The 5-year relative survival rates improved for all cancers combined and for most, but not all, cancers over 2 diagnostic periods (1975-1979 and 1995-2000). However, cancer-specific survival rates were lower and the risk of dying from cancer, once diagnosed, was higher in most minority populations compared with the white population. The relative risk of death from all cancers combined in each racial and ethnic population compared with non-Hispanic white men and women ranged from 1.16 in Hispanic white men to 1.69 in American Indian/Alaska Native men, with the exception of Asian/Pacific Islander women, whose risk of 1.01 was similar to that of non-Hispanic white women. The continued measurable declines for overall cancer death rates and for many of the top 15 cancers, along with improved survival rates, reflect progress in the prevention, early detection, and treatment of cancer. However, racial and ethnic disparities in survival and the risk of death from cancer, and geographic variation in stage distributions suggest that not all segments of the U.S. population have benefited equally from such advances. Published 2004 by the American Cancer Society.

T Goletz,  K Schlienger,  Lainey Rubin … (2001)
Immunosuppression may contribute to the progression of cancer. In this study we assessed the structural and functional status of T cells from tumor specimens obtained from patients with early stage non-small cell lung cancer and late-stage ovarian cancer. Although some groups have described structural alterations in the TCR in patients with other malignancies, we did not observe decreased expression of the CD3zeta subunit in the tumor-associated T cells. However, increased percentages of CD4(+)CD25(+) T cells were observed in the non-small cell lung cancer tumor-infiltrating lymphocytes and ovarian cancer tumor-associated lymphocytes. Furthermore, these CD4(+)CD25(+) T cells were found to secrete transforming growth factor-beta, consistent with the phenotype of regulatory T cells. Despite a generalized expression of lymphocyte activation markers in the tumor-associated T-cell populations, the CD8(+) T cells expressed low levels of CD25. To determine whether expression of CD25 could be restored on the CD8 cells, tumor-associated T cells were stimulated with anti-CD3 and anti-CD28 monoclonal antibodies. After stimulation, nearly all of the CD8 T cells expressed CD25. Furthermore, despite the low levels of interleukin 2, IFN-gamma, and tumor necrosis factor-alpha secretion by the tumor-associated and peripheral blood T cells at baseline, stimulation with anti-CD3 and anti-CD28 monoclonal antibodies significantly increased the fraction of cells producing these cytokines. Thus, tumor-associated T cells from patients with early and late-stage epithelial tumors contain increased proportions of CD4(+)CD25(+) T cells that secrete the immunosuppressive cytokine transforming growth factor-beta. Furthermore, our results are consistent with previous reports showing impaired expression of CD25 on CD8(+) T cells in cancer patients. Finally, increased lymphocyte costimulation provided by triggering the CD28 receptor is able to increase CD25 expression and cytokine secretion in tumor-associated T cells. These observations provide evidence for the contribution of regulatory T cells to immune dysfunction in cancer patients.

James A. Eddy (2000)
All progressive renal diseases are the consequence of a process of destructive fibrosis. This review will focus on tubulointerstitial fibrosis, the pathophysiology of which will be divided into four arbitrary phases. First is the cellular activation and injury phase. The tubules are activated, the peritubular capillary endothelium facilitates migration of mononuclear cells into the interstitium where they mature into macrophages, and myofibroblasts/activated fibroblasts begin to populate the interstitium. Each of these cells releases soluble products that contribute to ongoing inflammation and ultimately fibrosis. The second phase, the fibrogenic signaling phase, is characterized by the release of soluble factors that have fibrosis-promoting effects. Several growth factors and cytokines have been implicated, with primary roles suggested for transforming growth factor-beta, connective tissue growth factor, angiotensin II and endothelin-1. Additional factors may participate including platelet-derived growth factor, basic fibroblast growth factor, tumor necrosis factor-alpha and interleukin-1, while interferon-gamma and hepatocyte growth factor may elicit antifibrotic responses. Third is the fibrogenic phase when matrix proteins, both normal and novel to the renal interstitium, begin to accumulate. During this time both increased matrix protein synthesis and impaired matrix turnover are evident. The latter is due to the renal production of protease inhibitors such as the tissue inhibitors of metalloproteinases and plasminogen activator inhibitors which inactivate the renal proteases that normally regulate matrix turnover. Fourth is the phase of renal destruction, the ultimate sequel to excessive matrix accumulation. During this time the tubules and peritubular capillaries are obliterated. The number of intact nephrons progressively declines resulting in a continuous reduction in glomerular filtration.