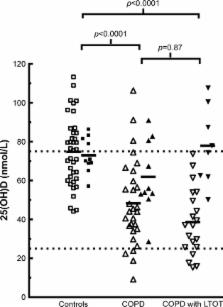 The prevalence of individuals deficient in vitamin D (defined as a serum level of the stable metabolite 25(OH)D <50 nmol/L) is increasing in countries with low annual ultraviolet (UV) radiation and among individuals unable to perform outdoor activities, for example, COPD patients.

To assess the role of vitamin D deficiency, independently of seasonal variation, the peak annual value of 25(OH)D was measured in subjects with advanced COPD ± long-term oxygen therapy (LTOT) and lung healthy control subjects. A method to grade the individual annual UV light exposure was designed and tested.

Sixty-six Caucasians with advanced COPD (28 with LTOT) and 47 control subjects were included, and the levels of 25(OH)D were determined in late summer/early fall when the annual peak was assumed. Questionnaires about COPD symptoms, general health, lifestyle, dietary habits and QoL were used to collect data. Lung function tests and blood sampling were performed.

Global and regional causes of death.

Doris Ma Fat,  Ties Boerma,  Colin D Mathers (2008)
Assessing the causes of death across all regions of the world requires a framework for integrating, and analysing, the fragmentary information that is available on numbers of deaths and their cause distributions. This paper provides an overview of the met and methods used by the World Health Organization to develop global-, regional- and country-level estimates of mortality for a comprehensive set of causes, and provides an overview of global and regional levels and patterns of causes of death for the year 2004. The paper also examines some of the data gaps, uncertainties and limitations in the resulting mortality estimates. Deaths for 136 disease and injury causes were estimated from available death registration data (111 countries), sample death registration data (India and China), and for the remaining countries from census and survey information, and cause-of-death models. Population-based epidemiological studies and notifications systems also contributed to estimating mortality for 21 of these causes (representing 28% of deaths globally, 58% in Africa). Ischaemic heart disease and cerebrovascular disease are the leading causes of death, followed by lower respiratory infections, chronic obstructive pulmonary disease and diarrhoeal diseases. AIDS and TB are the sixth and seventh most common causes of death, respectively, lower than in previous estimates. One-half of all child deaths are from four preventable and treatable communicable diseases. Globally, around 6 in 10 deaths are from non-communicable diseases, 3 from communicable diseases and 1 from injuries. Injury mortality is highest in South-East Asia, Latin America and the Eastern Mediterranean region. These results illustrate continuing huge disparities in risks and causes of death across the world. Global mortality analyses of the type reported here have been criticized for making estimates of mortality for regions with limited, incomplete and uncertain data. Estimates presented here use a range of techniques depending on the type and quality of evidence. Better evidence on levels of adult mortality is needed for African countries. Considerable gaps and deficiencies remain in the information available on causes of death. Nine of 10 deaths in 2004 occurred in low- and middle-income countries, reinforcing the fundamental importance of improving mortality statistics as a measure of health status in the developing world. Acknowledging the controversies around use of incomplete and uncertain data, systematic assessments and synthesis of the available evidence will continue to provide important inputs for global health planning. Innovative methods involving sample registration, and the use of verbal autopsy questionnaires in surveys, are needed to address these gaps. Research on strategies to improve comparability of cause-of-death certification and coding practices across countries is also a high priority.

Annemie M. W. J. Schols,  Ivone M Ferreira,  Frits Franssen … (2014)
Nutrition and metabolism have been the topic of extensive scientific research in chronic obstructive pulmonary disease (COPD) but clinical awareness of the impact dietary habits, nutritional status and nutritional interventions may have on COPD incidence, progression and outcome is limited. A multidisciplinary Task Force was created by the European Respiratory Society to deliver a summary of the evidence and description of current practice in nutritional assessment and therapy in COPD, and to provide directions for future research. Task Force members conducted focused reviews of the literature on relevant topics, advised by a methodologist. It is well established that nutritional status, and in particular abnormal body composition, is an important independent determinant of COPD outcome. The Task Force identified different metabolic phenotypes of COPD as a basis for nutritional risk profile assessment that is useful in clinical trial design and patient counselling. Nutritional intervention is probably effective in undernourished patients and probably most when combined with an exercise programme. Providing evidence of cost-effectiveness of nutritional intervention is required to support reimbursement and thus increase access to nutritional intervention. Overall, the evidence indicates that a well-balanced diet is beneficial to all COPD patients, not only for its potential pulmonary benefits, but also for its proven benefits in metabolic and cardiovascular risk.