A synopsis of the saddle fungi ( Helvella: Ascomycota) in Europe – species delimitation, taxonomy and typification 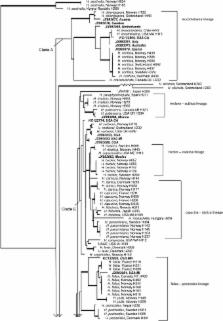 Helvella is a widespread, speciose genus of large apothecial ascomycetes ( Pezizomycete: Pezizales) that are found in terrestrial biomes of the Northern and Southern Hemispheres. This study represents a beginning on assessing species limits and applying correct names for Helvella species based on type material and specimens in the university herbaria (fungaria) of Copenhagen (C), Harvard (FH) and Oslo (O). We use morphology and phylogenetic evidence from four loci – heat shock protein 90 ( hsp), translation elongation factor alpha ( tef), RNA polymerase II ( rpb2) and the nuclear large subunit ribosomal DNA (LSU) – to assess species boundaries in an expanded sample of Helvella specimens from Europe. We combine the morphological and phylogenetic information from 55 Helvella species from Europe with a small sample of Helvella species from other regions of the world. Little intraspecific variation was detected within the species using these molecular markers; hsp and rpb2 markers provided useful barcodes for species delimitation in this genus, while LSU provided more variable resolution among the pertinent species. We discuss typification issues and identify molecular characteristics for 55 European Helvella species, designate neo- and epitypes for 30 species, and describe seven Helvella species new to science, i.e., H. alpicola, H. alpina, H. carnosa, H. danica, H. nannfeldtii, H. pubescens and H. scyphoides.

John Taylor,  David J Jacobson,  Scott Kroken … (2000)
The operational species concept, i.e., the one used to recognize species, is contrasted to the theoretical species concept. A phylogenetic approach to recognize fungal species based on concordance of multiple gene genealogies is compared to those based on morphology and reproductive behavior. Examples where Phylogenetic Species Recognition has been applied to fungi are reviewed and concerns regarding Phylogenetic Species Recognition are discussed.

Sibling Species in the Sea

You are free to share - to copy, distribute and transmit the work, under the following conditions:

Attribution: You must attribute the work in the manner specified by the author or licensor (but not in any way that suggests that they endorse you or your use of the work).

Non-commercial: You may not use this work for commercial purposes.

No derivative works: You may not alter, transform, or build upon this work.

For any reuse or distribution, you must make clear to others the license terms of this work, which can be found at http://creativecommons.org/licenses/by-nc-nd/3.0/legalcode. Any of the above conditions can be waived if you get permission from the copyright holder. Nothing in this license impairs or restricts the author’s moral rights.