A systematic review of cancer caregiver interventions: Appraising the potential for implementation of evidence into practice 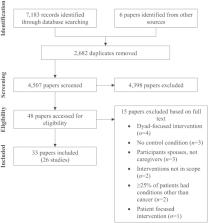 The search yielded 33 papers (27 papers from electronic databases and six papers from other sources) reporting on 26 studies that met review criteria. Fewer than half the studies (46%) contained evidence about the acceptability of interventions from caregivers' perspectives; only two studies (8%) included interventions developed with input from caregivers. Two studies (8%) addressed potential adoption of interventions, and no studies discussed intentions, agreement, or action to implement interventions into practice. All studies reported on intervention appropriateness by providing a rationale for the interventions. For feasibility, on average less than one‐third of caregivers who were eligible to be involved consented to participate. On fidelity, whether interventions were conducted as intended was reported in 62% of studies. Cost data were reported in terms of intervention delivery, requiring a median time commitment of staff of 180 minutes to be delivered.

Laurel L Northouse,  Maria C Katapodi,  Lixin Song … (2015)
Family caregivers of cancer patients receive little preparation, information, or support to perform their caregiving role. However, their psychosocial needs must be addressed so they can maintain their own health and provide the best possible care to the patient. The purpose of this article is to analyze the types of interventions offered to family caregivers of cancer patients, and to determine the effect of these interventions on various caregiver outcomes. Meta-analysis was used to analyze data obtained from 29 randomized clinical trials published from 1983 through March 2009. Three types of interventions were offered to caregivers: psychoeducational, skills training, and therapeutic counseling. Most interventions were delivered jointly to patients and caregivers, but they varied considerably with regard to dose and duration. The majority of caregivers were female (64%) and Caucasian (84%), and ranged in age from 18 to 92 years (mean age, 55 years). Meta-analysis indicated that although these interventions had small to medium effects, they significantly reduced caregiver burden, improved caregivers' ability to cope, increased their self-efficacy, and improved aspects of their quality of life. Various intervention characteristics were also examined as potential moderators. Clinicians need to deliver research-tested interventions to help caregivers and patients cope effectively and maintain their quality of life. Copyright 2010 American Cancer Society, Inc.

Beginning with the application in mind: designing and planning health behavior change interventions to enhance dissemination.

Russell E. Glasgow,  David Dzewaltowski,  Paul Estabrooks … (2005)
Failing to retain an adequate number of study participants in behavioral intervention trials poses a threat to interpretation of study results and its external validity. This qualitative investigation describes the retention strategies promoted by the recruitment and retention committee of the Behavior Change Consortium, a group of 15 university-based sites funded by the National Institutes of Health to implement studies targeted toward disease prevention through behavior change. During biannual meetings, focus groups were conducted with all sites to determine barriers encountered in retaining study participants and strategies employed to address these barriers. All of the retention strategies reported were combined into 8 thematic retention categories. Those categories perceived to be most effective for retaining study participants were summarized and consistencies noted among site populations across the life course (e.g., older adults, adults, children, and adolescents). Further, possible discrepancies between site populations of varying health statuses are discussed, and an ecological framework is proposed for use in future investigations on retention.