Present and Future of Bronchopulmonary Dysplasia 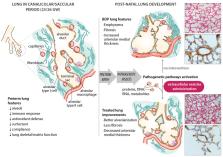 Bronchopulmonary dysplasia (BPD) is the most common respiratory disorder among infants born extremely preterm. The pathogenesis of BPD involves multiple prenatal and postnatal mechanisms affecting the development of a very immature lung. Their combined effects alter the lung’s morphogenesis, disrupt capillary gas exchange in the alveoli, and lead to the pathological and clinical features of BPD. The disorder is ultimately the result of an aberrant repair response to antenatal and postnatal injuries to the developing lungs. Neonatology has made huge advances in dealing with conditions related to prematurity, but efforts to prevent and treat BPD have so far been only partially effective. Seeing that BPD appears to have a role in the early origin of chronic obstructive pulmonary disease, its prevention is pivotal also in long-term respiratory outcome of these patients. There is currently some evidence to support the use of antenatal glucocorticoids, surfactant therapy, protective noninvasive ventilation, targeted saturations, early caffeine treatment, vitamin A, and fluid restriction, but none of the existing strategies have had any significant impact in reducing the burden of BPD. New areas of research are raising novel therapeutic prospects, however. For instance, early topical (intratracheal or nebulized) steroids seem promising: they might help to limit BPD development without the side effects of systemic steroids. Evidence in favor of stem cell therapy has emerged from several preclinical trials, and from a couple of studies in humans. Mesenchymal stromal/stem cells (MSCs) have revealed a reparatory capability, preventing the progression of BPD in animal models. Administering MSC-conditioned media containing extracellular vesicles (EVs) have also demonstrated a preventive action, without the potential risks associated with unwanted engraftment or the adverse effects of administering cells. In this paper, we explore these emerging treatments and take a look at the revolutionary changes in BPD and neonatology on the horizon.

Soluble endoglin and other circulating antiangiogenic factors in preeclampsia.

Xiaoting Liang,  Hung-Fat Tse,  Yuelin Zhang … (2013)
Mesenchymal stem cells (MSCs) are one of a few stem cell types to be applied in clinical practice as therapeutic agents for immunomodulation and ischemic tissue repair. In addition to their multipotent differentiation potential, a strong paracrine capacity has been proposed as the principal mechanism that contributes to tissue repair. Apart from cytokine/chemokine secretion, MSCs also display a strong capacity for mitochondrial transfer and microvesicle (exosomes) secretion in response to injury with subsequent promotion of tissue regeneration. These unique properties of MSCs make them an invaluable cell type to repair damaged tissues/organs. Although MSCs offer great promise in the treatment of degenerative diseases and inflammatory disorders, there are still many challenges to overcome prior to their widespread clinical application. Particularly, their in-depth paracrine mechanisms remain a matter for debate and exploration. This review will highlight the discovery of the paracrine mechanism of MSCs, regulation of the paracrine biology of MSCs, important paracrine factors of MSCs in modulation of tissue repair, exosome and mitochondrial transfer for tissue repair, and the future perspective for MSC-based therapy.

Michael Morse,  Jennifer Garst,  Takuya Osada … (2005)
Background There is a continued need to develop more effective cancer immunotherapy strategies. Exosomes, cell-derived lipid vesicles that express high levels of a narrow spectrum of cell proteins represent a novel platform for delivering high levels of antigen in conjunction with costimulatory molecules. We performed this study to test the safety, feasibility and efficacy of autologous dendritic cell (DC)-derived exosomes (DEX) loaded with the MAGE tumor antigens in patients with non-small cell lung cancer (NSCLC). Methods This Phase I study enrolled HLA A2+ patients with pre-treated Stage IIIb (N = 4) and IV (N = 9) NSCLC with tumor expression of MAGE-A3 or A4. Patients underwent leukapheresis to generate DC from which DEX were produced and loaded with MAGE-A3, -A4, -A10, and MAGE-3DPO4 peptides. Patients received 4 doses of DEX at weekly intervals. Results Thirteen patients were enrolled and 9 completed therapy. Three formulations of DEX were evaluated; all were well tolerated with only grade 1–2 adverse events related to the use of DEX (injection site reactions (N = 8), flu like illness (N = 1), and peripheral arm pain (N = 1)). The time from the first dose of DEX until disease progression was 30 to 429+ days. Three patients had disease progression before the first DEX dose. Survival of patients after the first DEX dose was 52–665+ days. DTH reactivity against MAGE peptides was detected in 3/9 patients. Immune responses were detected in patients as follows: MAGE-specific T cell responses in 1/3, increased NK lytic activity in 2/4. Conclusion Production of the DEX vaccine was feasible and DEX therapy was well tolerated in patients with advanced NSCLC. Some patients experienced long term stability of disease and activation of immune effectors