Development of idursulfase therapy for mucopolysaccharidosis type II (Hunter syndrome): the past, the present and the future 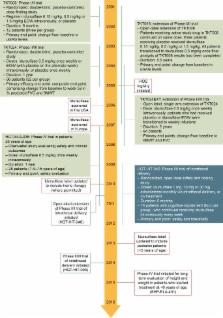 Mucopolysaccharidosis type II (MPS II; Hunter syndrome; OMIM 309900) is a rare, multisystemic, progressive lysosomal storage disease caused by deficient activity of the iduronate-2-sulfatase (I2S) enzyme. Accumulation of the glycosaminoglycans dermatan sulfate and heparan sulfate results in a broad range of disease manifestations that are highly variable in presentation and severity; notably, approximately two-thirds of individuals are affected by progressive central nervous system involvement. Historically, management of this disease was palliative; however, during the 1990s, I2S was purified to homogeneity for the first time, leading to cloning of the corresponding gene and offering a means of addressing the underlying cause of MPS II using enzyme replacement therapy (ERT). Recombinant I2S (idursulfase) was produced for ERT using a human cell line and was shown to be indistinguishable from endogenous I2S. Preclinical studies utilizing the intravenous route of administration provided valuable insights that informed the design of the subsequent clinical studies. The pivotal Phase II/III clinical trial of intravenous idursulfase (Elaprase ®; Shire, Lexington, MA, USA) demonstrated improvements in a range of clinical parameters; based on these findings, intravenous idursulfase was approved for use in patients with MPS II in the USA in 2006 and in Europe and Japan in 2007. Evidence gained from post-approval programs has helped to improve our knowledge and understanding of management of patients with the disease; as a result, idursulfase is now available to young pediatric patients, and in some countries patients have the option to receive their infusions at home. Although ERT with idursulfase has been shown to improve somatic signs and symptoms of MPS II, the drug does not cross the blood–brain barrier and so treatment of neurological aspects of the disease remains challenging. A number of novel approaches are being investigated, and these may help to improve the care of patients with MPS II in the future.

Post-translational modifications in the context of therapeutic proteins.

Roy Jefferis,  Markus Walsh (2006)
The majority of protein-based biopharmaceuticals approved or in clinical trials bear some form of post-translational modification (PTM), which can profoundly affect protein properties relevant to their therapeutic application. Whereas glycosylation represents the most common modification, additional PTMs, including carboxylation, hydroxylation, sulfation and amidation, are characteristic of some products. The relationship between structure and function is understood for many PTMs but remains incomplete for others, particularly in the case of complex PTMs, such as glycosylation. A better understanding of such structural-functional relationships will facilitate the development of second-generation products displaying a PTM profile engineered to optimize therapeutic usefulness.

I Parker,  James Dambrosia,  S Doppelt … (1991)
Gaucher's disease, the most prevalent of the sphingolipid storage disorders, is caused by a deficiency of the enzyme glucocerebrosidase (glucosylceramidase). Enzyme replacement was proposed as a therapeutic strategy for this disorder in 1966. To assess the clinical effectiveness of this approach, we infused macrophage-targeted human placental glucocerebrosidase (60 IU per kilogram of body weight every 2 weeks for 9 to 12 months) into 12 patients with type 1 Gaucher's disease who had intact spleens. The frequency of infusions was increased to once a week in two patients (children) during part of the trial because they had clinically aggressive disease. The hemoglobin concentration increased in all 12 patients, and the platelet count in 7. Serum acid phosphatase activity decreased in 10 patients during the trial, and the plasma glucocerebroside level in 9. Splenic volume decreased in all patients after six months of treatment, and hepatic volume in five. Early signs of skeletal improvements were seen in three patients. The enzyme infusions were well tolerated, and no antibody to the exogenous enzyme developed. Intravenous administration of macrophage-targeted glucocerebrosidase produces objective clinical improvement in patients with type 1 Gaucher's disease. The hematologic and visceral responses to enzyme replacement develop more rapidly than the skeletal response.

Cumulative incidence rates of the mucopolysaccharidoses in Germany.

E Miebach,  F Krummenauer,  C Kampmann … (2004)
In order to estimate the cumulative incidence rates of the mucopolysaccharidoses (MPS) in Germany, a retrospective epidemiological survey covering the period between 1980 and 1995 was implemented. Multiple ascertainment sources were used to identify affected patients. A prevalence of approximately 0.69 cases per 100,000 births was obtained for MPS I (Hurler phenotype). Within the study period, 4 patients with Hurler/Scheie phenotype and 7 cases with Scheie disease were detected. The cumulative incidence for MPS II (Hunter syndrome) was estimated as 0.64 cases per 100,000 births (1.3 cases per 100,000 male live births); that for MPS III (Sanfilippo syndrome types A, B and C) as 1.57 cases in 100,000 births; that for MPS IV A (Morquio syndrome) as 0.38 cases in 100,000; and that for MPS VI (Maroteaux-Lamy syndrome) as 0.23 cases per 100,000 births. Two cases of MPS IVB (beta-galactosidase deficiency) have been identified, but no patients with MPS VII or MPS IX. A relatively high number of patients with MPS IIIB, MPS IVA and MPS VI were of Turkish origin. The crude rate for all types of mucopolysaccharidoses is approximately 3.53 cases in 100,000 live births. The cumulative incidence pattern of MPS in Germany was compared with the corresponding rates among other industrial nations obtained from recent literature: the crude cumulative rates for all types of mucopolysaccharidoses (3.4-4.5 in 100,000 live births) were similar among all published populations; however, different frequencies of the various forms of MPS were observed.